Hello, I’m Suga. I like to draw cute nymphos.

Drawing has been a love of mine as far as I can remember. 2014 I started making paste up’s and putting them up in the street. But it was the year after when I came up with a style I deeply connected with. It was like that Ah! a moment, where I finally felt complete in a sense. I was always drawing nude girl’s since I was a teenager because I disliked drawing clothes and other artists I looked up to painted those subject matters. I would get ridiculed by dudes and some girl’s sometimes. They would call me a lesbian or make jokes, but I honestly didn’t care. I thought they were weirdoes for being boring.

Within your art, you look to focus on contradictions within female sexuality, symbolism, and power. Talk to us about that.

We all have contradiction’s within ourselves. I think it’s what makes us grow when we realize the contradiction’s within us and accept them. My girls are vulnerable, yet strong. Shy, but extremely confident. I like adding hint’s of life and death for the same reason. They like being gazed upon because they feel in control. Although they are tied up, they are free. When we have control over ourselves, we have power. My girls have the power to seduce and disturb. I like to implement flora and rope bondage because the meaning they have extend’s and becomes whatever I want. Flowers are a natural gift from earth to us, and very feminine. Using them as a motif with my girl’s only seems natural. I always take my time and analyze certain flower’s I’m drawn to. I like the silkiness of the petals and distinctive patterns. When you look closely into the middle of a flower (called a pistil) you can see it’s made up of hundred’s of mini flowers, it’s amazing! Some flower’s look like genitalia, so I place them over my girls or draw them licking the flower as a little joke. I get messages from all type’s of women saying my art helps them feel confident and strong. That brings a big smile to my face because then I know that the message I’m trying to get IS being received.I want people to feel confident, and strong and beautiful; so if people relate I’m happy. Female sexuality was always a “taboo” subject. I was brought up in a Mexican-Catholic household, so that was something never spoken of. My culture is still very male-dominated, but everyday women are fighting for their right’s. As a child, I never understood why mother’s spoiled their son’s, but shamed their daughters. My mom wasn’t like that but sometime’s I could see that mentality come out. I never blamed her it was just the way she was raised. So at a young age, I decided I was going to be just as respected as any man. I found solace in those thoughts. They made me feel confident and powerful.

What’s your obsession with Japanese Manga?

I wouldn’t call it an obsession, It’s what I grew up on. The first show’s that caught my personal interest as a child was ‘Cardcaptor Sakura’ & ‘Sailor Moon’. I paid attention to every detail- the fluid lines, hairstyle, fashion…everything. I didn’t know it was called anime back then, I just always preferred the “pretty girls” when it came to kid shows. It wasn’t until I was 9 when I owned my first manga, “Ah! My Goddess” these characters had a more realistic style to them, and even more voluptuous hair. The term “manga” was not something I knew until the 6th grade when I started buying the monthly issues of Shonen Jump. My older brother had an N64 & PS2, so video games are also a big influence on me. The concept art on the strategy guide’s drew me in, especially from the Final Fantasy games. I never questioned what the name of the art style was, and In my head, I didn’t even think of the correlation it had to manga. I just thought it was delicate and lovely. So since I didn’t go out much, and my parent’s limited tv/internet time for us, I would stay in my room and get lost in pages of my comic books. I had shelves of manga, Playstation & Play magazine. I never had a dull moment, because I was always reading. If I wasn’t reading, I was drawing and making up stories in my head. I had stopped being consistent with my art when I entered high school & grew more social. Doodling was more of my thing during those years. All of my high school note’s have drawing’s on the margin. Unfortunately, I became rusty, so I stopped doodling for a while. But again, whenever I found myself bored or just near paper I would start drawing. I decided painting was going to be my new hobby at 16, but I had to stop my manga styled art. As much as I tried, and forced myself, it was impossible. There was always something about my characters that seemed manga-ish. Drawing became something confusing and out of place for me. I was in search of a style to call my own, and it wasn’t coming to me! I was so frustrated until I discovered 3 painter’s I still love to this day. Audrey Kawasaki, Stella Im Hultberg & Camilla d’ Errico. They are all well-respected artist’s who can hold their own, & each of them have distinctive manga stylized art. Seeing their work made me realize I didn’t have to change mine. I felt more at peace with myself because I stuck to what I knew. Unfortunately, I haven’t kept up with much of the new anime/manga coming out lately.

As we talked about earlier, a lot of your work is centered around female sexuality, who are the girls in your drawings? What do they represent?

This is a question I get asked quite often! People often think the girl’s I draw resemble me, so they believe they are self-portraits. I wouldn’t say that is true, but my face is the one I know best you know? While the girls are not me, I do give them my mannerism’s and they are based on thought’s and feelings that linger within me. Sometime’s I have a muse, but not often.

Also, a lot of times they have ropes on them. What do the ropes represent?

I love rope bondage. It’s beautiful and feels nice, and is an art form itself. There are hundred’s of ways to tie rope, just as there are meaning’s for it. Depending on what I am thinking or feeling, each girl in bondage means’s something different to me.
Sometime’s the ropes represent trust, and emotional connection’s to other people.
Other time’s the ropes represent self-confidence, but also self-doubts. The rope can mean she has control over her life, or she doesn’t. I like to also think that it is a symbolism for freedom. Freedom of one’s personal choices and sexuality. Another reason I add the rope to many of them is that people still try to impose their limited views on what they think a woman should be. Restraining us in a way. It’s amusing to make a nonsexual statement, with an image most people would deem sexual haha. There is a misconception that Shibari (Rope bondage) leads to sexual activity. While it can be an intimate erotic practice, It has more to do with building trust, patience, and connections with people on a spiritual level.

A lot of people will say art is supposed to be uncomfortable. Is that your plan for your artwork?

At first, it was just for fun and my personal amusement. I was always kind of the prankster. Even though the images do have a personal feeling to them, I liked pasting them outside to piss people off. It was my way of saying “Haha! How does something like THIS make you mad?” I never understood why people were uncomfortable with women who were comfortable with themselves. I never understood why people would say women had to feel ashamed for being themselves. The more I noticed people responded to these images, the more I put them outside. I wanted to draw people in, and have them question themselves. Most of the responses have been positive. Other times negative, because they think I’m promoting abuse. I’d never promote abuse. From my perspective, what you get out of my art, reflects on the kind of person you are.

I want to talk about one of your pieces. ‘I Love Another & Thus I Hate Myself’. What is the concept behind this one? Deep symbolism and words.

“I love another & thus I hate myself” Is based on the poem “I find no peace” by Thomas Wyatt. I was inspired by a song and a girl. I did the piece back in 2014, while I was working at a fast food joint. I happened to pick up a call and it was a girl crying over the phone, saying she needed help and didn’t know what to do. She said she was afraid and couldn’t deal with her partner any longer. I told her to hold on, so I took down the number from the caller ID and downloaded a Text Now app (I didn’t want to give a stranger my real number) I looked up numbers for domestic abuse hotlines, and women relief centers & sent the info her way. She replied and wrote back how grateful she was.Her family was living in another state and she came to Chicago by herself, so she didn’t know much about the city. I thought about the situation, and it made me realize how people can be blinded by love until something bad happens. Everybody around you notices, but instead of helping you, they just watch and talk about it. As I said in the question above, I would never promote abuse, but I do believe it is something people should be aware of and try to help if they see somebody going through that. 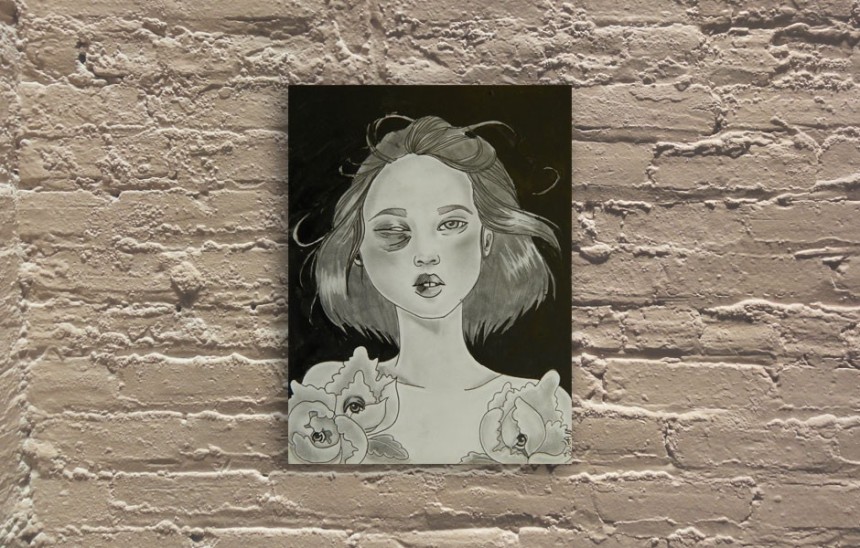 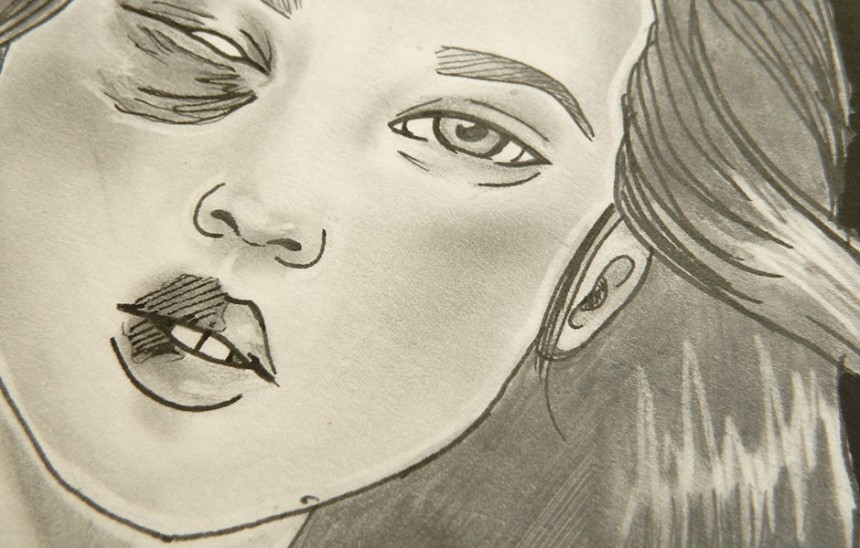 Who are some of your favorite female artists in Chicago?

Chicago is blossoming with talent! Right now I really enjoy music artist Ravyn Lenae. For visual artists, I adore Vivian Le. She puts so much care and detail into her work, it speaks loudly. Jas Peterson is also a favorite of mine. I love her “Fast girls” for how classy they are with a little hood. Amber Bas is a multi-talented artist and video director also. Her videos are so dreamy, they remind me of Chris Isaak’s “Wicked Games” music video. I dont really like the term “Female artist” tho, it reminds me of “Female rapper” it just causes segregation within creatives.