Yo! I go by Lurrkgod aka Rod Saw, and I’m a photographer and Chicago native.

How did you make your way into photography?

My interest in photography started when I was a freshman/sophomore in high school. I hadn’t traveled outside of Hyde Park much (my home neighborhood) prior to high school, so I decided that I wanted to start exploring the city. I started lurking in different neighborhoods, and I usually found graffiti in a lot of these places. I would take photographs to capture the essence of the places I had been and the moments I’d experienced in them.

When did you first start getting involved with graffiti?

Graffiti never really stood out to me at first, but once I started to get interested in it, I noticed it everywhere. I loved seeing a name up across multiple neighborhoods, and I loved seeing graffiti pieces in cut spots that looked like they had been painted years ago. The first spot that really got me hooked on graffiti was the 53rd mobile wall (rip) in Hyde Park. I met a lot of writers back there and saw a lot of really wild pieces. The wall was in an alleyway and was super long and kind of short. The way the fumes carried, you’d smell paint as you entered the alley before you saw the work. I remember going to the wall straight geeked to see which crew had painted every weekend.

Who has been your favorite graff artist you’ve developed a relationship with over the years?

I’d say one of my favorite graffiti artists is Raven. He’s a real humble dude, one of the most supportive people I know, and his work is killer. The way he develops his letter styles are super organic and I enjoy watching him flex on a wall. I used to see his work on the 53rd mobile wall and he’d take up 3 regular spots to paint one piece. In addition to that, Raven places a lot of value on community empowerment and usually includes that in his work.

When it comes to shooting graff artists, is there a trust that needs to be established?

Definitely. To this day I still make it a point to say to hello to every artist I run into before taking pictures. Graffiti is still very much illegal in a lot of ways, and writers still get caught up for it. It’s important that the writers I work with trust that I’ll represent them in a way they agree with.

Who do you think are the top five graff artists in the city?

Haha, that depends on what areas of Graffiti we’re talking about. Personally, my favorite writers are Raven, Nerd, Jash, Blockhead, and Enjoy. I’ve watched Raven and Nerd paint a handful of times and the way they paint is super expressive on its own. Nerd paints pieces like an old school bomber so his process is always interesting to watch. Jash’s letter style is pretty dope and the way he has developed his J’s are on point. I love running into Blockhead’s pieces because of the ways he flares colors in and out of his letters. The phrases he adds to each piece are usually cool too, like “Attack, Sustain, Decay, Release.” Lastly, Enjoy has been killing it. He’s made a lot of progress since his previous name, and he and the TDM crew have been smashing the streets. 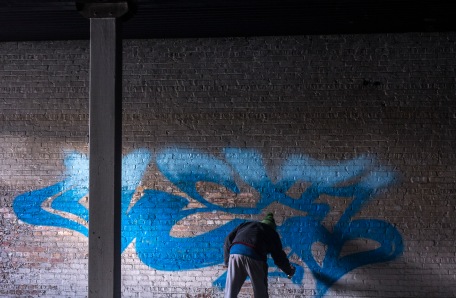 Do you think the internet has helped graffiti?

I think the Internet has helped and hurt Graffiti at the same time. On one hand, it’s been a great tool for writers and photographers alike to connect and share work. Services like Instagram have helped widen one’s audience within and beyond city limits. I think it’s cool to be able to see what people in other communities are doing. On the flip side, a lot of people “get up for the gram”. Graffiti is supposed to be about who gets up in the streets, and not how many likes you have or how many people took pictures of your work. As a documenter, I think it’s important to capture the work for others to see, but no picture will ever replace the experience of seeing a great piece in person, how it feels to paint at a spot or the memories behind different missions. I try to remember that what’s on Instagram is a small reflection of what’s out there but not the whole picture to it.

Lately, you’ve been doing some writing for Southsideweekly magazine. How has that been?

Working with Southside Weekly has been cool because I get to be involved with seeing what’s going on in the south side. I’m a visual arts editor, so I spend a lot of time looking into arts/community arts initiatives. As an editor, I’ve pitched/edited stories to writers, and I’ve also written a couple stories myself. My last piece was titled “Reversing the Buff” and was an interview with the founder of the Brown Wall Project. I started doing interviews within the last year or so, and having a platform to share these interviews on has been important. I’ve also enjoyed being able to see what stories my peers at SSW are working on.

On top of Southsideweekly, I’ve seen you doing some work with YCA. Are you working with Kevin and the team now?

Yeah, I’ve been working with YCA as a social media intern. That’s been fun because I get to sit in on a lot of the workshops that run at YCA. A lot of the students there are really talented and bring some amazing energy to their performances. As a social media intern, I’m tasked with trying to capture some of that energy with my photography. It’s definitely been an enjoyable experience so far and I can’t wait to see how YCA continues to grow.