Hello everyone, my name is Emily Blue. I’m a 22-year-old singer/songwriter from Urbana, IL.

How was life growing up in Urbana?

Champaign- Urbana as a community is based around the University of Illinois. Arts and music are something that is really important in CU. When I was growing up I did a ton of art and music camps.

My mom is a professor– she’s very assertive, educated, and goal-oriented. Having my mom as a guiding figure inspired me because women are not often given power or influence in the home, or in public. Even though I got a lot of criticism and attention from my parents as an only child, my mom has been a powerful female role model and I’m thankful for that.

I knew I was creative at a young age. My dad is a visual artist and he always taught me everything he knew when I first held a pencil. He taught me a lot about visual art and got me really interested into that.

How did you start getting into music?

When I got to middle school, I ended up writing my first song, but my Mom will say I wrote my first song when I was three because I would always be singing. But, the first structured song, which had a verse, a bridge, a chorus, came about when I was 13. I didn’t know if I was any good, but I knew that it felt good to write music. I showed my friend because I was too shy to even show my music to a large group of people.

After I wrote that first song, I instantly knew that this is what I wanted to do. Soon after I told my Dad that I’m going to be a singer/songwriter. He replied saying, “well you may want to plan around that” and I just remember saying, no, basically saying, you don’t understand my dedication to this craft. 10 years later I’m still here making music.

You have been a part of a few projects, but Tara Terra has been the biggest.

Tara Terra has been a huge part of my life for years. Although I had been in a few projects beforehand, this was the first band to tour and get national recognition. The group came about when I was leaving high school and searching for a backing band. I pulled these strings of people together in the scene. Colin and Joey both went to High Schools near me in the area, that’s how I knew them. Once we all came together, I realized that we aren’t a backing band; we are a band that collaborates.

Last year you embarked on a journey of creating music solo. Why was that?

That happened on accident actually. I was going through a really hard time and had nowhere to put these ideas and feelings, so I decided to put it into a whole record about womanhood, rape culture, and trauma. I couldn’t put my feelings about being a sexual assault survivor into the band because they wouldn’t be able to authentically relate. The band totally wanted to support me and put the project out with me, but I didn’t feel like it was right. That led me to start pursuing music and spreading my message as a solo artist. At first, it was only supposed to be a one-off, but it kind of led me to realize my own creative capacity and where I could go. Emily Blue was then born and has been putting out music ever since.

Who is Emily blue?

I’m going to speak in third person for this one . . . I guess Emily Blue doesn’t ever really sit still. She is both a retro and futuristic pop personality and a person who sits in her PJs playing folk tunes at home. If Emily Blue were a comic book character, she would be on roller skates, have a giant lollipop, and try to make everyone happy. She’s sweet, poppy, and colorful, but not so ridiculous that people don’t take her seriously. I guess I’m trying to figure out how to be fun, bright, and contemplative at the same time. 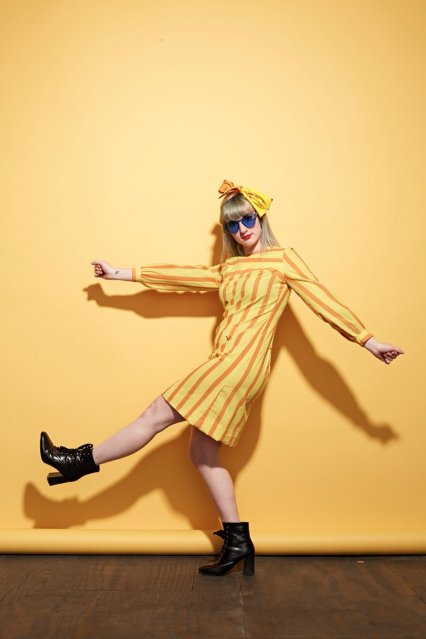 You were working on a solo project before Another Angry Woman, why’d you decide to scrap that?

The project was just empty. It didn’t have the authenticity and self-assuredness that Another Angry Woman had.  I felt that if the music is supposed to help you connect to someone and feel something, then the initial project had to go because there was nothing there.

Lets talk about your first solo project, “Another Angry Woman”

With this project, I was focused on what I was saying and how effectively I was saying it. Particularly I wanted to focus on rape culture and womanhood and bring these topics to light. There’s a lot of frustration, anger, and hurt in this record, but there’s also a healing process that you can hear if you listen all the way through. On this project, there are also interviews with other people about these matters. I truly believe if I didn’t put this record out, I wouldn’t ever get to a stable place personally. I needed an outlet and this project was that outlet.

This spring you released a whole different sound. That project was #BubbleGumAcidrap

This project was a breath of fresh air. My friend Max has a studio setup in a Logan Square basement and we sat up recording and making music until 5 am every morning. His approach to recording music is so different than mine. Mine used to be; everything has to be perfect going in, where with Max he believes in just sketching ideas and to not spend more than two minutes on something, just move forward. That’s why we had such crazy sounds on the songs.

Next week Tara Terra is releasing a new album. Talk about Where’s Your Light?

We recorded this record at Audiotree last summer. It was one of the most incredible experiences in my life. I really stepped up my writing this project. “Where’s Your Light?” is all about the story. The concept behind a lot of the records is this family goes on vacation and their daughter walks into the waves, drowns and never comes back. The whole story is how the family responds, the aftermath of the situation. There are different characters on the record and I’m interested to see if people can interpret who they are.

You said, “it is one thing to create music channeling your own emotions. It is another to attempt to channel the emotions and experiences of other people.” How do you look to do that with your music?

I think the new Tara Terra record is a good example of that. What I was trying to do was create these people that are responding to something intense, complex, and imagine myself to be them. I then wrote with as much fine detail as I could. I imagined what they woke up to every day, what their rooms looked like. What their favorite smells were. With creative writing, it’s all about specificity and learning when to be specific.

Who are three artists you would love to work with?

I would love to work with Erykah Badu, Caroline Smith, and Joseph Chilliams.

I would like to be remembered as someone who crafted songs very well and made them memorable. I also want people to remember me for being a kind and good person. I have very low self-esteem during my darkest moments and convince myself I’m a shit person. So with my writing, I try to reflect on things in my life and truly understand them so I can be the best version of myself. It’s my way of working on my mental health and I want to help other people work on theirs too.

1 reply to Who Is Emily Blue?