What’s going on man, go ahead and introduce yourself

Hello everyone, I am Rahmaan Statik and I’m Chicago’s best-kept visual secret in visual art.

I’m very thankful for the upbringing I had. I was lucky enough to be raised around people who would protect me and allow me to steer away from getting involved with negativity that would alter my character.

What’s the meaning behind your name Statik?

Statik comes from that force or power, and that’s what I look to strive myself on.

When did you start developing a passion for art?

I would say I got into art around the fifth grade. I wasn’t into sports as much as other kids were. I was into out of the box concepts and weird ideas, as a kid I was heavily interested in comic books and video games. When I was growing up, I actually really wanted to be a comic book illustrator, I would go to comic book events a lot, and it was always very inspiring.

How did you get started in graffiti?

I got into graffiti by being involved with hip-hop culture at a young age. Around 12 years old or so is when I first started getting introduced to the different elements of hip-hop. I started out airbrushing first, then later on transitioning into using spray paint. A lot of the people around me in my neighborhood knew I would always have paint, so they would always ask me to go paint with them. When I first started getting into graffiti I was doing a lot of tags and etching on the buses. 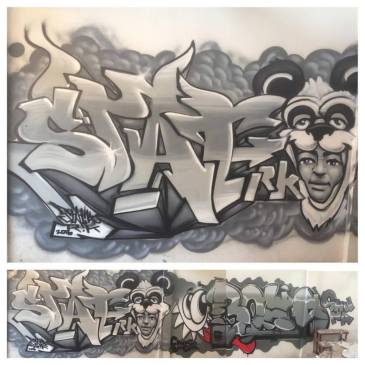 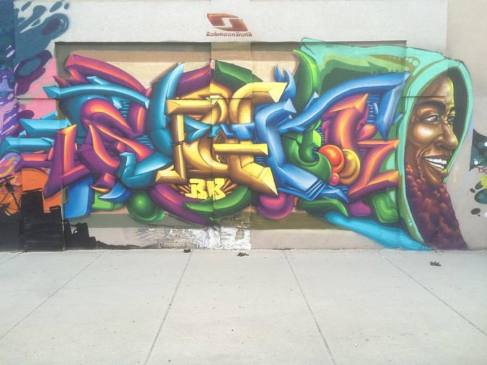 Would you say the natural transition is from graffiti to murals for most graffiti artists?

It really depends. I’ve seen graffiti writers with a ton of talent that just stop right at bombing and illegal work and I’ve also seen graffiti artists who like my friends and I transition from illegal to legal work only.

You obtained a degree from the American Academy of Art in Multi Media/Web Design. How much graphic design work goes into your mock up for a production piece/mural?

It usually all depends on the project I am taking on at the time. When it’s a collab piece with my friends or other people, I don’t usually do mock-ups. Mock-ups usually are created in Photoshop when I’m on a solo endeavor and need to be very keen to detail because the project is dependent all on me and I need to manage x amount of space on the wall.

Do you believe as an artist you have a duty to deliver a message to the world? If so, what’s the message you look to deliver with your artwork?

I do believe in that. I believe in art as being your personal voice, and that’s how I look to positively contribute to society. “The work I produce both symbolizes and created optimism for life in our industrialized society. It also challenges the over-saturation of mindless sexual and violent images in pop visual culture. I put forth a passionate effort to produce art that has a spiritual, political, and urban aesthetic.”

For the past couple of months you’ve been putting in a lot of work for a project at the Rosemont Convention Center. Tell us a bit about this project

I produced this project as Rosemont’s Museum of Street art, meaning I created this project to bring art to the streets for the public to see. People who may not necessarily know too much about art can come to these walls to see the beautiful artwork and understand a bit more about art. 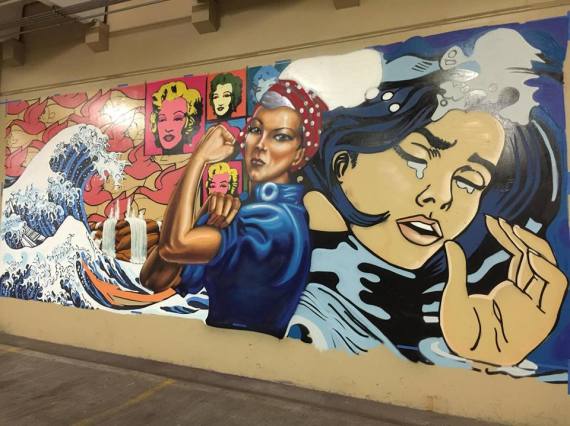 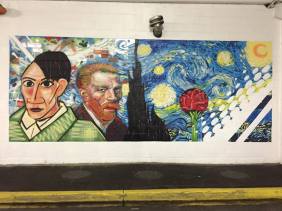 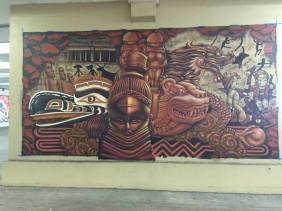 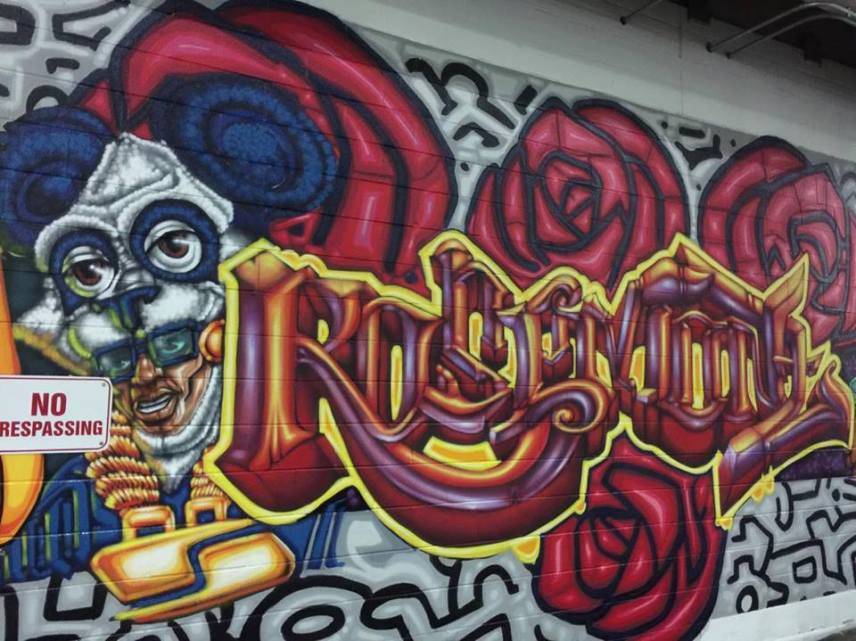 On top of this project, recently you got a ton of exposure after creating a Prince mural in Avalon Park. Why was it important for you to do this piece?

With the Prince piece I just really wanted to pay homage to a fallen artist. Doing pieces for historic figures that have passed tends to be a reoccurring them within my artwork. I care about painting fallen artists that people should be aware of, I always wanted to bring the light to artists that have helped change the world. Also, I thought the Prince piece would be a wild subject to make a piece out of. 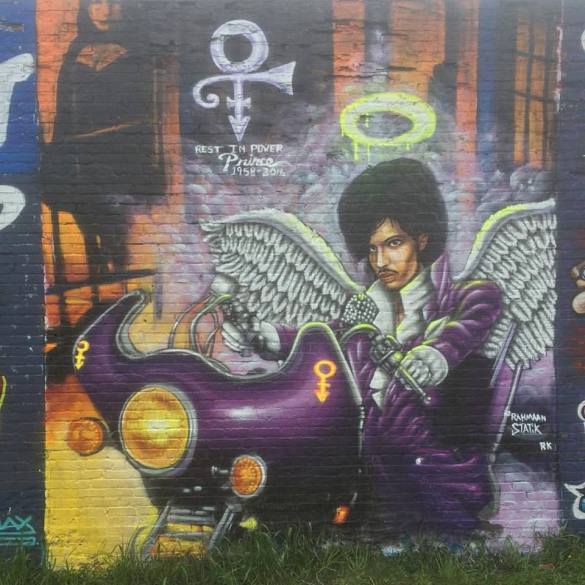 Why do you consider yourself “Chicago’s Best Kept Secret In Visual Art”?

I consider myself one of the freshest dudes you’ve never heard of. I truly believe I’m slept on and over looked as an artist. One thing I could say is that being slept on doesn’t discourage me from making my art, I don’t care too much about the social part of being an artist, I just really enjoy making the art, and that’s what I’m going to continue to do.

After producing over 200+ murals over the years, what piece was the one that meant the most to you?

I always say this; my favorite piece is always the next one. The past work I’ve done has been great, but I tend to not get stuck on my old work. I’m always trying to move forward and create the next best piece.

Why don’t you think the Southside gets the credit it deserves for being an area filled with beautiful artistic murals?

People come to Chicago and right away are told not to come to the south side because you may get killed. The Southside has some of the freshest murals and so many talented artists have come out of the southside. The Southside is the microcosm of what Chicago is.

When did you come together with the rest of the guys to start RK?

RK was started in 1997 by Max Sansing and I. Max and I got caught together doing graffiti, and we looked to transition out of illegal into legal walls. Getting caught ended up being a blessing in disguise because it ended up help creating our crew. Our mission as a crew is to paint as many legal walls as graffiti artists did illegal piece. We looked to take doing murals very seriously, and we have continued that over the past 20 years. 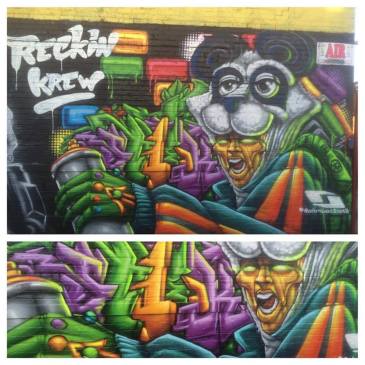 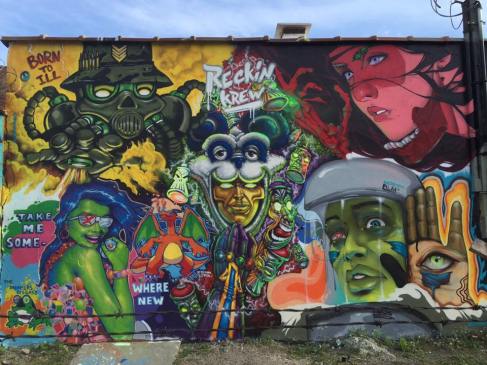 When it’s all said and done how does Statik want to be remembered?

I want to be remembered as a dude that tried to set the record straight. I want people to remember that Art is a spiritual movement, and I looked to use my art to spread positivity throughout the whole world. Art could be used as a tool for social change and self-actualization; I want people to know that my mission was to use my art to help people achieve their higher potential.