What’s going on introduce yourself
Hello everyone, my name is Aaron Firestein. I’m the Co-Founder and Chief Artist of Bucketfeet. I was born and raised in Berkeley, California, but I’ve been living in Chicago for the last five and a half years.
How was life like growing up in California?
The Bay Area is an amazing place to grow up. It’s one of the only places in the world where you can have an urban experience and an experience in nature in the same exact day; it’s beautiful. The diversity of The Bay was able to stick with me.
At what age did you then begin to find yourself becoming creative?
I’ve been creative my whole life. I really got into drawing and doodling around five years old. As I continued growing up I continued finding my passion in music and photography. 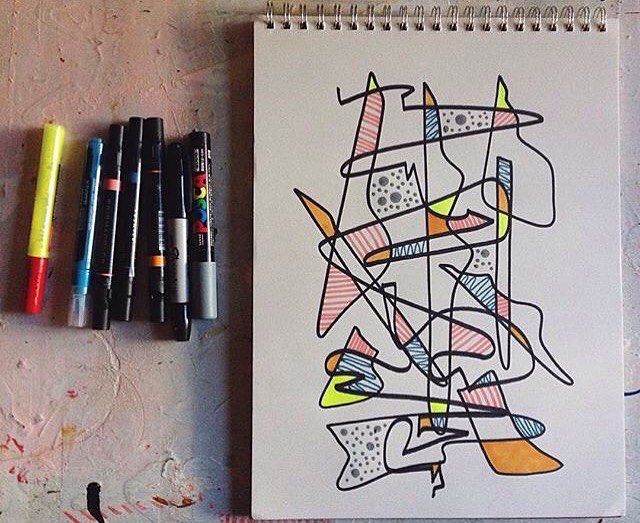 Why did you decide to attend the University of Oregon?
I was interested in many different schools. My main focus was to leave the state of California. The University of Oregon is a popular school for kids from Northern California. I wanted to also be apart of a big school with a fun sports program. Looking back on it, I’m very glad I went there.
In what ways did college help you prepare for the real world?
College teaches you how to learn, that’s what I liked most about college. Attending a huge university is a new place to meet brand new strangers everyday. College teaches you how to grow up fast.
Did you have any businesses/companies before BucketFeet?
I had a really small-scale event photography business when I was living in Argentina. I was doing freelance photography work for nightclubs, events, and weddings. For the most part, BucketFeet was my huge first introduction to the business world.
In 2011 you launched Bucketfeet with Raaja, how did you guys end up meeting?
Raaja and I met in Argentina in 2008. Raaja was an ex-banker who was traveling around the world and Argentina ended up being his first spot. We met in a villa (slum) on the outskirts of Buenos Aires, the capital of Argentina. We both had volunteered for this organization that worked with kids and became friends. At the time I was running a shoe customizing business and had offered him a pair of shoes before he left for the rest of his trip. A year and a half after we met, he reached out and asked if I wanted to turn this hobby of mine into a business.

(These were the original Bucketfeet called “Cuadras” which means “blocks”. These shoes were inspired by the city blocks of Buenos Aires where Aaron and Raaja first met in 2008)

(Aaron & Raaja)
Out of all people, why was it then important to start the company with Raaja?
There were no other people at the time that had been reaching out to me to create a business. To me, what made me excited about teaming up with him was, here’s this guy who I just met, and he had saw something in me. The confidence and belief in what I was doing truly meant something to me.
For someone who is trying to create a company or get into a business, is it best to create by yourself or with other likeminded individuals?
It depends on what you’re doing. I personally think the result is always going to better when it’s a team effort. Even if you enter the business world by yourself, you’ll eventually have to find likeminded people to create with. I believe that’s one of the main reasons behind the success of BucketFeet, we all have the same end goal but go after it from many different perspectives.
Explain the meaning behind the name BucketFeet.
Bucket was a nickname I had in college. My friends thought it was funny to just call me Bucket and it eventually stuck. In college I was starting this company where I was customizing shoes and had been selling them to friends and family. I think the thing about the name what I like the most is that whenever you hear the name you remember it, regardless of whether you like the brand or not.

You’ve been able to work with some very talented artists throughout the years who have created the artwork for your shoes. When it comes to these artists are you looking to develop relationships with them, or how do you select the artists?
I’d say it’s both. Most of the artists who we work with now find out about us and hit us up through our website. I’m still very much on the hunt to find artists that are making moves and making a difference. Throughout the process I have been fortunate enough to form personal relationships and it’s something I don’t ever want to lose. Even as we grow, it’s something we will continue to strive on. When artists reach out or have questions they want to feel like they’re interacting or communicating with real people at the company. This whole idea came about by two strangers meeting who wanted to make a difference in the world. The idea of connecting people and making the world a brighter place is truly at the heart and soul of the company. 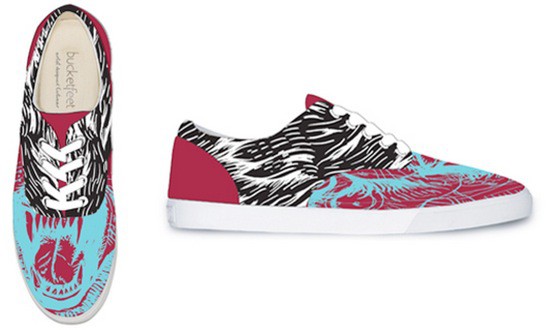 (Shoes Designed by Chuck Anderson aka NoPattern)
What was it about shoes that made you want to create your own line?
I started drawing on my shoes very young. There’s always been something about shoes, even though I enjoyed sneakers; I was never really a sneaker head.  I’ve heard the expression; “You should judge a man by his shoes”. It’s a part of your everyday outfit that is thought about much more deliberately than anything else. Most people spend a few seconds deciding on what shoes they’re going to wear. There’s also something very symbolic about shoes, they take you from A to B. Also, you can never cover them up. You could have a very cool t-shirt on, but nobody knows because you’re hiding it with a flannel or a hoodie – shoes will always be seen. On top of that, nobody was doing what we were doing as a brand.
When it comes to the artists designing, do they have full creative control?
They do have full creative control although it’s our job to make sure the shoes sell. If we think that there’s a different color that could be used, or a different way the artwork could be presented, we reserve the right to do so. As a company we always make sure to maintain the integrity of the artist. We want to make sure that when the artist sees their shoe, that if it’s altered, it’s still their artwork.

They say the first four to five years for a business are considered “the survival years”. How have the first five years been for you guys and what were the biggest issues early on you guys faced?
That is a very true statement. It’s amazing to have a business that has lasted this long. The survival rate of businesses after 1 year is around 5%. You have different issues at different stages. Raising money has always been at the forefront of running this business. Shoes are a product that you need to put up substantial amounts of money upfront to produce. Early on, that’s something we underestimated. Inventory problems were another early issue we faced. We were putting in the same amount of units per size, when in reality there are way more sevens and eights in women’s than tens. As we have grown, growth itself is a very tricky thing, it affects culture, and you have to understand that there are certain responsibilities you have to give up to others.
How is having a business in the heart of Wicker Park help boost your brand?
Wicker Park is the hotspot right now for shopping and culture. Throughout the years Wicker Park has changed a bit though as well, it’s a bit more upscale than it used to be. There were businesses that were staples in the neighborhood that are no longer here. Having the company right here on Damen brings in a lot of foot traffic.

Are there any plans on opening up locations outside of Chicago?
We are opening two new locations this summer in Washington DC and Miami.
Three years after you and Raaja started the brand; BucketFeet was listed on the Top 30 startup companies on Entrepreneur.com. How was that feeling?
It was a great feeling, but we know that there’s so much for us to accomplish.
How did you guys get credibility so quickly? Did you look to develop any key partnerships with anybody?
A lot of it had to do with being a totally unique brand in a city that had nobody like us. Being in Chicago has been great; it’s always been a cultural hotspot, but something really special has been happening here in the last 5-10 years and we’re excited to be a part of it. We will work with partners if it makes sense and if it doesn’t then we wont.
When it comes to your competition how do you guys look to then stand out?
It’s all about staying true to us. There are a lot of other brands out there that work with artists,  but that’s all we do. By continuing what we are doing, we will always continue to stand out.
Over the years how have you begun to see social media open the door for young entrepreneurs?
Social media is a very powerful tool; it’s a great way for people to interact. I heard this quote, “The difference between traditional advertising and social media is advertising is a brand talking at you, where as social media is having a conversation.” If you were an entrepreneur I would hope that you figure out the best social media tools for you to use, they’re free. The flipside, because it’s free and anybody can use them, there’s a lot more noise to cut through. For any field, I think social media has opened up the doors for a lot of people who may have not made it through otherwise.
What social media platform creates the best traffic for you guys and your customers?
I think due to us being a very artist focused brand, it’s important to be heavily visual. On that note, Instagram in my opinion works best for us. Facebook drives the most sales, but Instagram is the best way for us to tell the story of the brand. It’s a perfect platform for what we are doing; we showcase the products, the retail space, and the artwork throughout the store.
What advice or any career plan can you give any person looking to become their own boss?
I think it’s very important to understand that life is all about taking risks. Life could be scary and there will always be reasons to not do something. If you think you might have some sort of a good idea, just go for it. A lot of people are hesitant to go out and create something because they think they are going to fail. If you do fail, you’re going to learn regardless. Go into anything with a backup plan, so if it does fail, you’ve got something to fall back on. I always say this: surround yourself with smart people. It’s a bad sign if you walk into the room and you’re the smartest person because there’s no where to go but down.