What’s going on, introduce yourself

My name is Miguel Aguilar, aka Kane One. Born and raised right here in Chicago. I’m an artist, educator, grass roots organizer, and executive director. 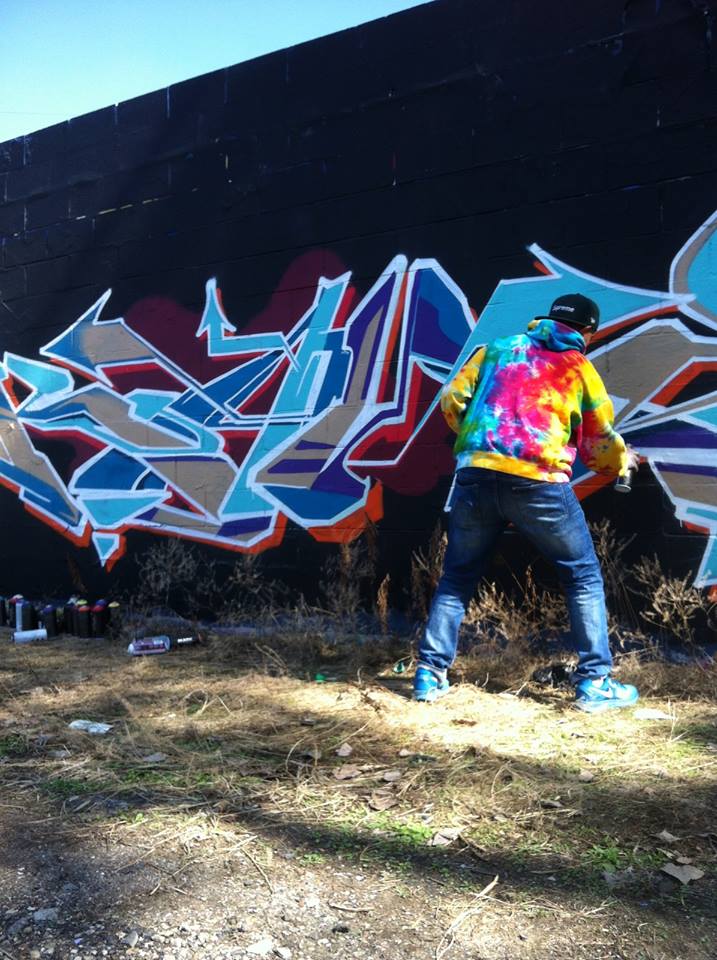 Explain to us where you got the name Kane

I was djing and in a dance crew growing up. I was always in charge of making our mixes. My friends would always come over and listen to my vinyl. One day, a friend of mine suggested I should go with the name Kane, like, Big Daddy Kane.

How was life like growing up in Pilsen in the 80’s?

It was a lot of watching over your back. I had to go through around 4-5 different gang lines just to get back and forth to Catholic school. I went to Catholic school to avoid all of the gangs in public school. Most of my younger years I had to learn to steer clear of people chasing each other and ducking in between cars as soon as I heard gunshots because bullets ricochet off of telephone poles real easy.

Over the past couple of years we have begun to see gentrification play a huge part in destroying communities and neighborhoods. How has gentrification begun to hurt Pilsen?

The way I think it’s problematic, is that it erases culture. It makes things generic in a way that is driven off of consumerism. Rather than having local storefronts, local murals, or things done by people in the neighborhood, it gets kind of washed away and the landscape begins to look radically different. If people could live together without having to remove each other that would be fine. What ends up happening is that people start to develop capitalist opportunity, and people become very aggressive with trying to get opportunity at the ground floor. The kind of stuff that comes along in Pilsen with gentrification are, all of a sudden people who have lived in their houses for 20-30 years, they’re getting surprise city inspectors and getting violations. These developers are causing these things to happen. They’re putting pressure on the city to see who is wrong and who is in violation so that they can come in on the other end and tell the people that they’re in all of this trouble. Once they put the residents in fear, they then offer to buy the building from them to get them out of there.

When did you first get into dancing?

I got into dancing I’d say around 11 years old at Dvorak Park. I was one of the younger guys in the dance group. The dance group was called Posse In Effect. (Public Enemy)

Through dancing, you were able to transition into Graffiti. Before graffiti, were you interested in drawing or illustrating?

Before graffiti I had been drawing. I would copy things out of magazines around 7-8 years old. I was really trying to practice on my hand-eye coordination. I would see an ad, or a face, or a product in a magazine and try to mimic it as best as possible.

When you were first getting into graffiti what did you write?

I first wrote 2smal. That was a twist on the rapper Too short. When I was growing up, the Animaniacs came out, and I was writing Buster. I played around with Chevy for a little while as well.

Also, who were some of the big graffiti writers you had looked up to? (Locally, nationally)

For me, since I knew my neighborhood basically better than anywhere else, I looked up to a lot of the local dudes like Zore, London, Anti, and Aztec.

Did you have any mentors show you the ropes in your early days? Or, did you learn everything by yourself ?

I went blindly through my first 1-2 years. For High school, I ended up attending St. Ignatius (College prep) and these kids in homeroom taught me some more things on graffiti. From there, I got into a crew with dudes from Oz Park called KMD-FAR.

Through graffiti how were you able to transition into more fine arts?

While I was in High school, I was also in drawing classes and photography classes. While I was doing graffiti in the streets, I was also learning about fine arts in the classrooms. I continued taking those art classes for three more years. Those classes ended up having a big impact on me, and I started to become more interested in other creative mediums besides graffiti. 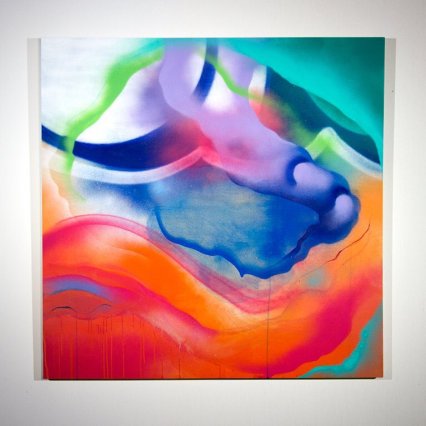 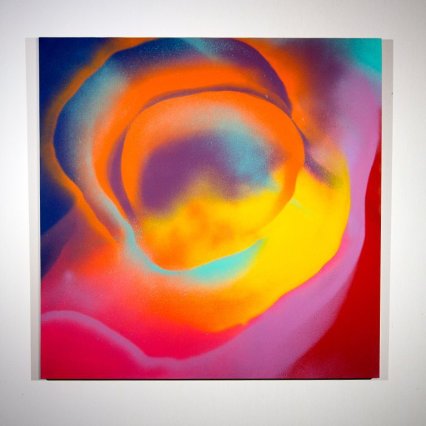 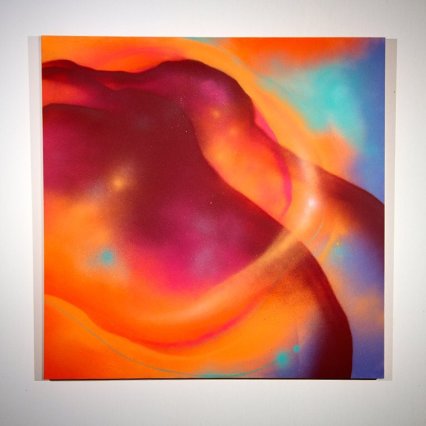 You graduated from SAIC in 2000 with a Bachelors degree in fine arts. Was college something you were always looking to attend?

Once I graduated highschool, I actually had no plans of attending college. In the 90’s, there used to be these CTA battles, and one of the years my crew DC5 got second place. Earning second place, we received one merit scholarship. One of our members ended up taking the scholarship to SAIC. I remember going on the college tour with Shred and becoming very interested in attending college. After the tour, I ended up enrolling.

As a graffiti artist, was college the route for a lot of guys?

Not really, I didn’t really see anyone from the neighborhood at this fine art school. When it came to graffiti artists attending College, there were two paths for them. One, some of the graffiti artists ended up just becoming graphic designers and focusing more on that, or, two, the graffiti dudes would just test out after a couple semesters because they didn’t see any value in College.

In 2009 you decided to go back to get a Masters degree in Art for Teaching. Anyone who knows you knows how much you always give back and look to help the next generations. Why do you feel it’s so important to be a teacher to the younger generations?

It’s just a social responsibility. I’ve seen generations after me who weren’t given guidance or resources. Over the years, you have been able to see how that has negatively impacted the art scene as a whole. I felt really lucky that people were giving me the time and space to ask questions that I had.

Has teaching been able to help you become a better artist?

Oh yeah, totally. What I have learned from teaching is that, there were so many mental blockages that I had growing up. Now, I’m able to try all these things I wasn’t able to try growing up.

You once said, “There are graffiti writers who just do graffiti because they’re assholes, or who want to fuck up peoples stuff” How were you able to display your artwork in a more positive way to diminish those stereotypes?

Unfortunately I can’t diminish those stereotypes. All I could do is lead by example. I exist in spaces where I want to create paths or references of possibility for people right next to me or behind me.

I see you with JoeFreshgoods a lot, how did you guys develop a relationship?

Throughout the years I’ve seen Joe in the city at events, private parties, etc. If you start using the city as your living room, you begin to see the same people right away. The world gets really small very quick in Chicago. We began to get cool with each other and as he was launching Dope Boy Magic, I became a big fan of the brand. One thing led to another, and we began to help each other out whenever it was needed.

In a lot of your pieces we see the name “Carol”. Who does that represent? Carol is my wife. We started dating in 1994, and now have been married for 18 years and we have 4 kids. 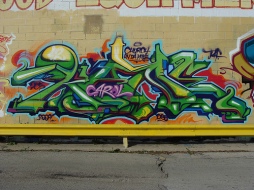 Throughout your years of being an artist, you have been able to work with a ton of brands. How was it being able to design for Nike?

It’s cool. I don’t know if it’s because I’m older now, but I never pressured a relationship with Nike. It was more about me being curious on how the local office operated. I was always very appreciative of any invitations to events. It’s never been a career goal, to say I have worked with Nike, and I think that took a lot of pressure off of me on how I interacted with the staff here. Due to that, it made a professional and organic relationship happen over the years. On both sides we don’t have any high expectations from each other, when things align it’s awesome.

If anyone knows anything about Chicago graffiti, they would know how much your crew Def Con Five has been able to bring to the walls over the past 25 years. When and how did you get into Dc5?

I got into DC5 around 1992-1993 during my SR year of high school. Prior to joining, I was out painting a lot with Shred. We had a set of permission walls, where we put ourselves through this crazy rigor. We tried to paint a piece a week and sometimes we would paint two pieces a week. After 2-3 years of working together, we had a crazy condensed body of work, and we each learned about our own practice and how to collaborate. It ended up being pretty natural to turn DC5.

In 2016, is graffiti becoming a movement that is beginning to become more accepted by the masses?

Looking back on your career what has been your favorite moment?

My hardest and most gratifying moment was giving my Thesis Symposium. It made such a dent in the academic world. I did it in 2011 and people are still reading my thesis and asking me for research questions. Other people in academia are using the work that I did as a valid reference point. I’m still seeing the rewards from all that effort five years later.

Personally, I’m going to pull back a bit from doing pieces. I’m going to concentrate on other bodies of artwork that I’m trying to keep myself interested in. I’m looking to focus my shift and get excited on creating new art ideas.

2 replies to Miguel Aguilar/ Kane One