In our latest interview, we caught up with Jacob Polhill. We talk about our first interview together a year and a half ago and how he’s grown since, his decision to go back to college for design, his character Lil Doody, and much more. Indulge below and make sure to follow Jacob on his social media platforms

I’m Jacob Polhill and I’m a visual artist who is also studying Industrial Design and some Graphic Design at the University of Illinois at Chicago.

The first interview we did was in November of 2017 and you were very new to the city, maybe only three months in. Now, how do you feel and how have you grown?

Man, Chicago is my favorite place in the world right now. I don’t feel like I could live back home. While I love Rockford, I cannot mentally live there. It just moves too slow for me. That’s not to disrespect my hometown at all, it’s just not for who I am as a person right now. It was really tough when I moved out here. I didn’t have a job lined up. I was painting tons of shoes for people, but still wasn’t making as much money as I should’ve been. I needed something to keep me busy though and help pay my rent. I remember eating PBJ’s and quesadillas every day for a month until I got my first job in retail…

This past year you decided to go back to school to major in Industrial and while also taking some classes in Graphic Design. Nowadays, it seems as if people are turning away from traditional college, however, you decided to go earn a degree? What caused that?

I moved to Chicago to attend Columbia. Once I went through the orientation and realized how much money I was going to have to spend (even after receiving a scholarship) a year, I was like I am not going to pay for that. I took the year off, worked two jobs, and was looking for internships/opportunities. During that year off, I was going to a lot of events and observing the art scene in the city. I realized my art and my creativity was not where it needed to be for me to actually get anywhere in Chicago. That year was a lot of self-reflection. From there I began to hone in and started experimenting. That’s when I came up with my style and Doody was born. It’s actually been a little more than a year now that I’ve been doing what I’m doing. It’s crazy.

My decision to go back to school was based on the fact that most places you needed to either have a college degree or be in college to get an internship. I decided to go to UIC to study Industrial/Graphic Design. Amazingly enough, I kind of fell into an amazing program that I’m really excited about. I really enjoy being a part of the traditional curriculum and be critiqued. Yes, while you can learn everything on your own, who is going to be there to tell you that you suck? That’s the most important thing to me. I want to be told when I suck by people who know what they’re talking about. That’s how I grow and get better. It’s a process and because of the internet, a lot of people want everything so instantly. While originally the plan was to go back to school to get a job, I’ve realized that I’m really learning and watching my art grow.

As you continue to evolve as a designer and artist, do you see yourself ever evolving out of Lil Doody?

Oh most definitely. I would love to expand past it. I call Doody a character because a lot of the things that I convey in my art is self-expression. Whether it be what I’m feeling or what I’m seeing. It’s almost like a visual diary. I just figured that I had to put a name on it. If you’re seeing my progression, you’ll begin to notice other elements and other characters coming into play with Doody. Honestly, I would love to get to a point where my art becomes this visual thing and I begin telling stories through cartoons or comics. One thing I notice with myself is that I get bored with creating the same thing over and over again, which means I have to find new ways to reinvent the wheel. If I don’t, I’ll eventually get bored and won’t want to do it anymore.

I’ve been investing in better paint for 1 and two I took a color theory class that really helped me. I began training my eyes to see colors in different ways. Yellow isn’t just yellow, it could almost be green. Blue can almost be purple. When you start to train your eye to see these things, you can really start to tell a whole different story. I’ve started mixing mediums and using like $5 craypas over my paintings just to add a different dimension and layer. When I put craypas on my paintings, it makes me feel like a kid again. That feeling is something now that I’m finally getting back into. When I first started making art as a kid, I was using so many colors and I want to get back to that feeling of experimenting and having fun. 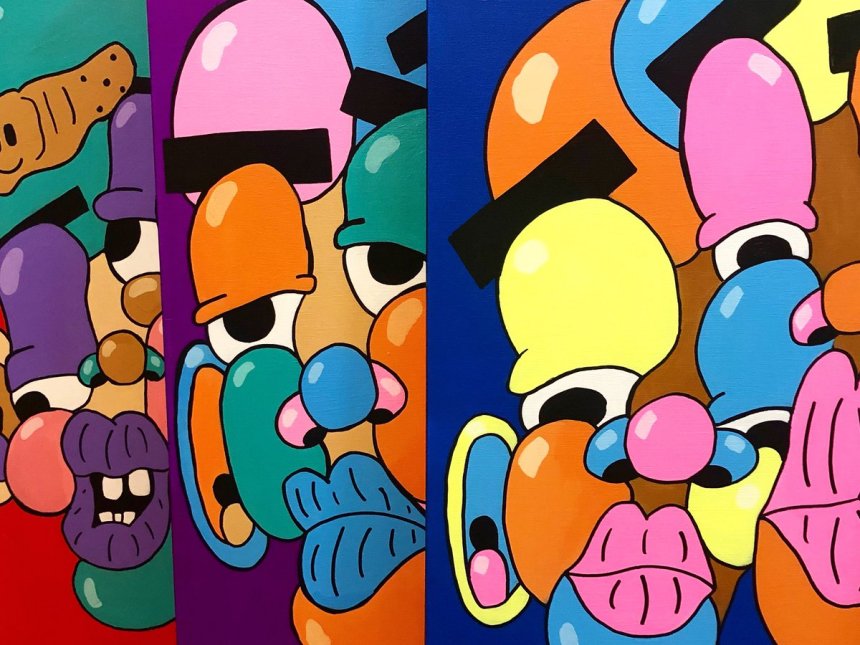 Do you finally feel as if you’re hitting your creative stride?

Yes. For me, I’m finally at that point where I feel like I can submit artwork into shows and feel confident about it. My work doesn’t look like anyone else’s and it’s of quality. I feel like I can exist in a gallery space and I’m confident in that now. I didn’t feel that before. That feeling sucked, but that’s one trait I really like about myself. I had this self-reflection and realized I needed to get better.

When did you get to the point when you became accepting of your work?

I’d say when my work became personal. There was a point in my career where I was creating and making good money off my work, but I then thought to myself, if I’m ever going to exist in a space where galleries want to show my work, they’re not going to care that I do a portrait of Kanye West 100x. Yeah, like that’s going to sell on the internet. People like shit that they recognize. I started realizing it’s not even about me being so different, but rather it was all about me being recognizable. I’ve also just begun getting personal with my work. You’re going to have these experiences every day. That’s what keeps me always inspired. Don’t get me wrong, at times you’re going to hit the creative block, but I feel like I get less now that my work means something.

That’s my favorite piece ever. That canvas had been painted over at least 20x. It took me forever to get the idea I wanted. I remember doing the sketch on my iPad and instantly I knew it felt like something. That piece was a self-reflective piece on the process of growing up. It had been roughly over a year since I had moved to Chicago and it was about me reflecting on all these things that I’m different as a person because of. I was tackling the societal expectation of being a 22-year-old, the process into manhood, etc. Moving to Chicago has made my relationship better with my mother and I’m super grateful for that. The piece was about the balance of what it means to be professional, all while keeping that inner child personality.

As we slowly approach mid-year, if you could hold yourself accountable for accomplishing one goal – what would that goal be?

I’ve tweeted this and posted this on all of my other social accounts to hold myself accountable, but this year I am going to do a solo show. It’s one of those things where I feel like I just need to do it and say fuck it. If it doesn’t work out, I’ll go back to the drawing board and figure things out. I think that it’s a risk that I need to start taking. I feel like I play it safe too much and it’s time to really put myself out there.