In our latest interview, we caught up with Ruben Aguirre to discuss his intro to graffiti and his Chicago influences, talk about the graffiti and gallery conversation, traveling the world, creating new styles, and much more. Make sure to follow Ruben on Instagram.

My name is Ruben Aguirre. I am an artist, painter, and creative person.

Let’s take it all the way back to the beginning, when did you first find your passion for art?

I first started drawing when I was young. My Dad would draw when he came home from work and I would sit at the table and draw with him. While it was something I always did, I never really thought that much about it. Once I found Graffiti and what that was about, I really wanted to pursue art. I connected with Graffiti early on and it really resonated with me.

Who were some of the writers that got you into graffiti early on?

When I was around 14, I had one friend who really got me into Graffiti and he, unfortunately, passed away shortly after that. He was the one dude that took me in and showed me what graffiti was about. At the time, he was my only friend who was a writer. After he passed, I wasn’t too sure if I was going to continue doing graffiti because I always did it with him. I ended up continuing doing it and by the time I turned 17/18 and got my own car, that’s when I really started painting, going out, and actually taking graffiti seriously. But to get to your original question, DC5, Raven, and Zore were big influences on me. I really idolized them.

When a lot of people look at your abstract work, would you say that influence comes from your Graffiti background and letter structuring?

Absolutely. I don’t think of it as an entirely different thing. To me, I’m just creating in a new context. If you take the word out of it, it just becomes form and those forms you can pull and stretch them the same way you would do to a letter. 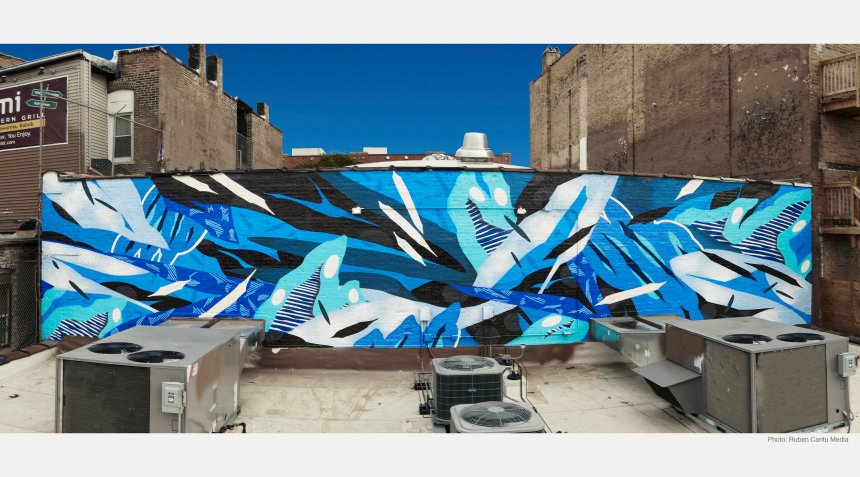 The Chicago Tribune did a piece on you and titled it “From graffiti to gallery”. You have a rich graffiti background, and it never seems as if publications want to hone in on that, rather they want to highlight ‘gallery’ work because it sounds more appealing to the mass consumer audience…

I think that whole idea is changing over time. At one point when I was painting more graffiti and not even thinking about doing abstract stuff, there was a huge gap between graffiti and galleries. To even think about making money off of graffiti here in Chicago at that time was close to impossible. There were a few slivers of opportunities. It’s really all about context and how you want to sell it to people. Some people want to buy graffiti because they don’t know what it is and they think it’s cool and sometimes it’s the complete opposite and people don’t want to hear the word graffiti. I will say, it’s changing with the times. The younger generation could care less. They don’t carry that stigma of the word graffiti.

One of my favorite pieces from you is titled “From Matter to mind, from mind to matter”. You did this piece at Simone’s, what was the meaning behind this piece?

That piece is the only one that I had to include the logo in it. At first, I didn’t want to do it because I didn’t want to do the logo. I tried to get around it and they weren’t budging. But I wanted that opportunity and wanted to find a creative solution for it. I interpreted the logo which is the silhouette of a flying woman to be a spiritual manifestation. That’s what I was feeling at that time in my life. I felt that I was creating my new life and it was a big deal for me and that’s what I wanted to express within that piece.

A few years back you were able to travel to Brazil and you talked about how it was such an eye opening experience for you. In Brazil, all of the walls allow for public painting at any time of the day. Have you since been able to experience a country just as eye-opening as Brazil?

Last year I went to Bogota, Columbia, I’d say that was the same experience, if not more graffiti. There are still some places in the world where it’s like that. I’ve always looked at graffiti magazines as a kid and so I knew graffiti was happening in other places, but I never had the chance to travel and visit these places as a kid. I grew up in Chicago where everything got buffed, literally everything. When I went to Brazil and Bogota, there are walls that have never been buffed. It’s the complete opposite of Chicago and it tugged at my heart. What kind of creative world could’ve manifested in Chicago if people got to see that artwork every day? I believe it’d be a different place.

At this point in your career, what’s still drives you to create every day?

Everything I create is in a different place all the time. That’s the most refreshing part for me. I always get to go to new spaces, spend time there, and learn about the history.

While creating for so long, do you find it harder to try out new or style or easier?

I’m always open to try new stuff. I’ve fallen into a place where there is a certain aesthetic that people desire in my work and that’s fine. I wouldn’t say I get to experiment with some of those projects, but I get to try things out on my own. Here and there I’ll get asked to experiment with other styles and I’m very grateful for that. I think that I’ll just continue to experiment on my own time and people will either like it or they won’t. I’d say though, most of the public work I do is under a similar aesthetic. It took me a long time to have my work sought after, like a really long time. Obviously, I want to try new things and develop, and there will always be chances for that.

As you look back on it, what are the most significant experiences in your artistic career that are still influencing your style and personality?

I think I can answer this question in two ways, one to painting graffiti, and two painting abstractly. With painting graffiti, there were certain people that shaped me, the way I thought about it, approached it, etc. That was the foundation for everything to come after that. I can also apply that to being able to step out of that comfort zone because I painted graffiti for 20 years before I was willing to experiment. I was kind of insecure about that. I wasn’t really sure if I wanted people to see what I did because I thought I would be judged. The graffiti community judges very harshly. I figured people would talk shit and say it isn’t graffiti. I could’ve painted abstract pieces at any time, but I didn’t have the courage or motivation to do it. One day I finally did and that changed everything for my career. I think at the end of the day it all came from me being willing to step outside more. I spent a long time learning a certain craft, and then being willing to throw it to the side and mix it up wasn’t easy to do.

Over the years, as you’ve grown as an artist and as a person, what do you think is the biggest lesson you’ve learned?

I think to just keep making your work. I never stopped painting. There were a couple of moments where I thought I should probably stop because I thought I was too old to be painting graffiti. I struggled with that because I felt like I was supposed to grow up. Once I put those thoughts aside, I realized this is what makes me happy and I’m going to keep doing it. I think by continuously painting and painting, whether there was money involved or not, it allowed me to grow. That path has never slowed down and I owe everything to that. If I just dabbled in it and just did it on the weekends, or was really excited about painting, but only did it if there was an opportunity, I’d be 20 years behind. I don’t think everyone understands, but you really just have to grind it out no matter what. Not everything you do is going to get bought, seen, or appreciated. A lot of artists have a hard time with that. They think everything needs to be a hit.