In our latest interview, we caught up with Nick Lipton to talk about how being sober has helped him creatively, releasing photo books in a digital world, whether or not the term being ‘creative’ has become watered down and much more. Indulge below and make sure to follow Nick on social and check out his website for more photos.

My name is Nick Lipton. I’m 30 years old, a Creative Director at Leo Burnett, and my girlfriend and I recently started a company called Muerte Studio.

Many artists or creatives dabble with drugs somewhere along their journey to either cope or to help fuel their creativity. For you, you decided to switch things up, this year marks your 3rd year sober. How has being sober helped you creatively?

Being sober has made funding projects much easier. In the beginning drugs and alcohol really opened doors for me. When I was young, I was a party guy, and I thought it was the coolest thing in the world. My heroes were Keith Richards and Hunter S. Thompson. One of my first gigs was to write about snowboarding. In that world, I was a young guy who suddenly had some influence. People began buying me drinks. That led to professional touring with the Dew Tour, Musicians, and whomever else. VICE hired me to go and write about the parties that were happening in these places after Skateboarding/Snowboarding events. All of a sudden, the gnarlier stories I would write VICE would be like ‘Fuck yeah’ and the more I would get hired. This was during the era when money started getting poured into blogging/online journalism. After some time, I ended up leaving and landing a Copywriting job at Leo Burnett.

When I got into Advertising, bar culture was huge and I partied a lot. For a long time partying worked and I used it to fuel many stories, get out of writer’s block, and make connections with people. When I got to my late 20’s it wasn’t fun anymore. I got sick of waking up and being regretful for the things I said to people or making certain decisions at 4 a.m. I remember being sober for a week then that turned into a month and from there I just never went back. Through being sober I started to learn about my ego and my identity. I would say if I never decided to sober up my work would’ve suffered until I was just another crap creative. I would’ve been fired and another sob story at AA.

As I got into Leo, they had a need for ‘Content Makers’, so I ended up running around the country shooting content for brands. Eventually, I stopped because I saw a fallacy in that. Every time I shot a job I took food out of the mouth of photographers I respected.

During this time I was getting sober, and I wanted to just start shooting the stuff I enjoyed. I would say 6-8 months into shooting for myself I quickly realized I had a ton of photos from various trips. These photos showcased my new POV as a sober individual. This might sound super egotistical, but that was important to me because I thought other people would give a shit about the work. When I finally got down to editing, I had all of these projects planned out, but I was like holy shit, the project is going to be about one year of sobriety and what it looked like through my eyes. After looking back on it, I’m really proud of it. I’m proud of the writing I put together and that I designed the entire thing. 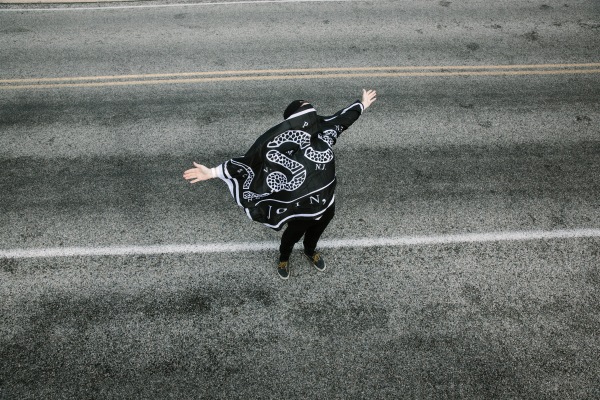 Recently you dropped another book, ‘Iron Pride’, are books your way of releasing photos?

I think the book thing works because A) It gives me a bunch of shit to do with my time, B) It allows me to flex my ability to be very critical of myself and grow, and C) I get to play the dice game. I spend a lot of money producing this and then throw it out into the world and find out if it’s any good.

I’m terrible at Instagram. I’m sure I could be good at it or whatever, but I have a full-time job that’s very demanding. What’s funny though is that I have hard-drives with folders that say ‘For Instagram’ that will never get posted. I also really hate sitting down and editing photos for Instagram. I’m not spending my whole Sunday to get validated by a bunch of people who don’t even like me. I also don’t want to be one of these ‘Instagram Photographers.’ Being somebody whose job it is to be very critical and hard on photographers, the average individual with 20-100k followers, takes garbage photos. Some of the best photographers in the world have 800-2000 followers. Chicago is a great example. Sandro Miller is a bonafide fucking superstar in the art world and he has around 2k followers and posts all the time. It doesn’t jive with what looks cool, it doesn’t have VSCO filters, but people know, collect, and respect his work.

I see a ton of photos of Lowriders, can we expect those photos in a book soon?

I started this book around 2014-2015. Originally a lot of those photos were supposed to be in White Knuckle. When editing White Knuckle I noticed I had too many low-rider photos. I thought to myself I should really do a low-rider book because I love this shit and was beginning to finally make some friends in the industry. Looking back, I can see how uneducated I was. Taking pictures of cars that weren’t low-riders, taking pictures of cars and people in the wrong way. I could see my fear and outsiderness in the photos. As I continued growing, I saw how I became accepted and made friends in certain circles. It became easier to take photos. Good or bad, that’s for other people to decide, but these photos showed a perspective that was shared between them and me.

In the middle of this project, I got to this point where it became really important to do it right and show respect to the culture. At that point it was like, this book can potentially never end. This year was definitely my most productive year. Anywhere I would go I was welcomed by certain people who instantly greenlit things for me. Once the community, whether it be Arizona, Dallas, or wherever, saw me greenlit by the club president or the riders, suddenly everyone became comfortable with me being around them. With all the work I’ve been putting in, it gave me hope that by next summer or fall I can have the book out.

A lot of your photos you tend to be up close and personal, are you friends with the people you shoot?

It’s 50/50. Anybody that is an aspiring photographer knows you go through the struggle of gear. I’ve gone down a ton of different paths. Now I just shoot on a 28mm lens. Which means if I’m doing a portrait or something I have to get extremely close. I’ve gotten comfortable enough in situations where I’m like, alright, I’m just doing this. I’ve been in situations where people have told me that it’s not cool to take these photos of homeless people. People think I’m invading their privacy. I don’t mean to be rude, but I don’t give a fuck. We have a degree of responsibility as far as not ruining the person. However, in my opinion, exposing people to this shit is also good because it makes them realize there are issues in the world. There’s a big difference in saying ‘homelessness is a problem’ and realizing there are 1,000 junkies living in the street. Maybe that’s something we can work on. Maybe being horrified by the fact that this mom has a needle hanging out of her arm will make you vote differently.

The phrase, “I’m a creative” has become the norm for many people to say in this day and age. Do you believe being a ‘creative’ has been watered down?

Yes. At no other time in human history, has everyone gotten to ‘be creative’. Everybody just gets to create now, and there’s such a small barrier of entry. You want a website, get one from Squarespace. You want to be a Photographer, grab your phone. You want to be a Writer, start a blog. There’s just so much garbage out there. And, now there always has been. But, my problem with it is, the desire to rise above garbage is not there. People will never admit that. I think it’s because our generation doesn’t know what real success looks like. Don’t get me wrong, I think right now we are getting some great work, but I just think we are getting bombarded with garbage.

I always enjoy ending each interview with this question because it’s always interesting to see the varying answers. As you’ve continued to grow, what do you think is the biggest lesson you’ve learned over the years that you’d like to pass to others?

You know, I think there are two. You can’t burn the candle at both sides of the stick and if you want to make something, you have to go out and make it.