Who is Charlie Alright?

I’m Charlie Alright. I’m an 18-year-old artist from the small town of Oswego in Central New York and attending The School of The Art Institute of Chicago this fall. I started my body of work as a means for therapy following a traumatic brain injury and its evolved into the focal point of my life. I’d like to say my work is not only my passion but my purpose.

When did you believe you can make art your career?

I don’t believe I can pinpoint an exact moment that led me to believe that art was going to be my career, following my injuries I feel as if I redirected my focus to something that was really meant to be for me. As long as I can remember I was stealing computer paper and pens from my parents and teaching myself how to draw, even when I had been focused on sports earlier in high school I had always been drawing, but I think that once I started using my work primarily as a means of expression and a conduit for my thoughts I wanted the world to see what I was doing. Now that art is my focus and driving point for life I find myself relating a lot to Bukowski’s ‘Roll the dice’ where he says, “ if you’re going to try, go all the way.” the idea of giving the entirety of yourself to your craft has been something that resonates with me. I toil with my brush and paint, if it leads me to develops a successful career then that’s wonderful until then I’ll still be creating and pushing myself, putting my whole heart and passion into my work 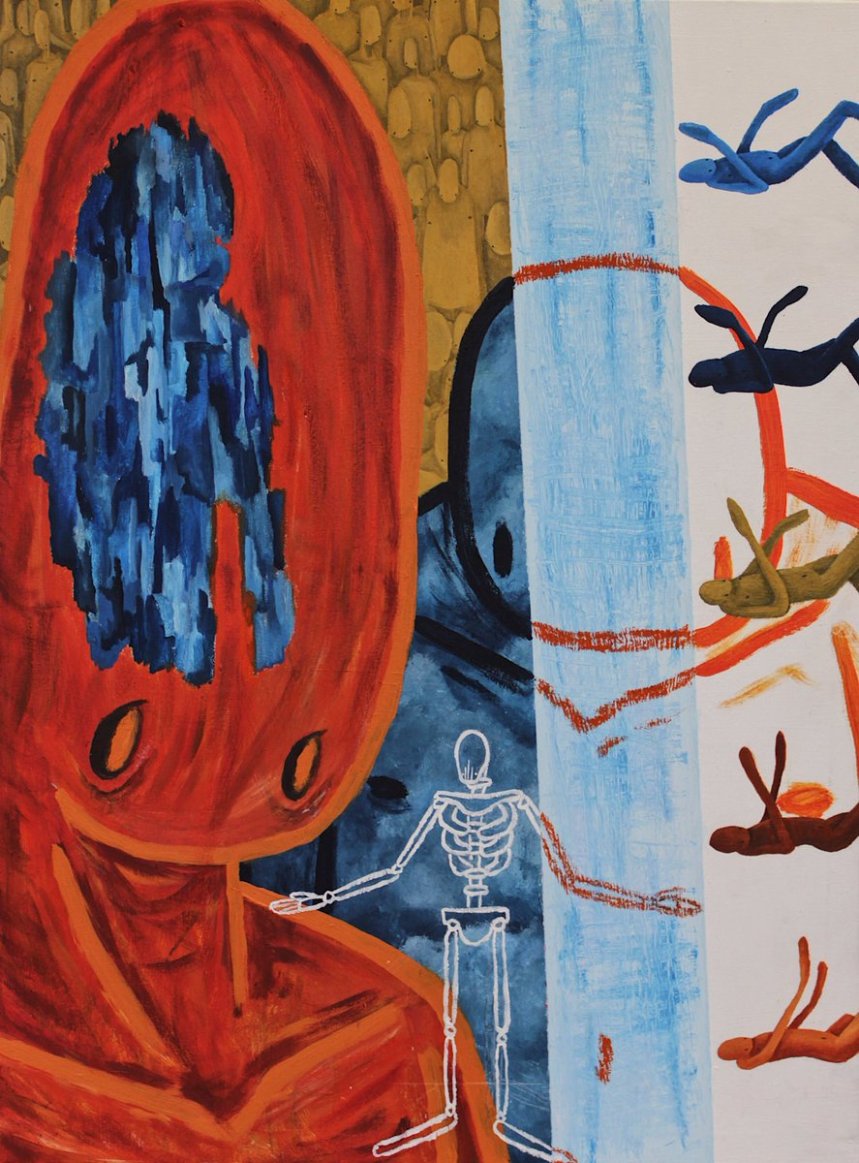 This fall you will be attending SAIC. Out of all the schools, what made you choose SAIC?

The School of The Art Institute of Chicago is highly prestigious in itself and it had constantly been brought up to me when looking for schools or opportunities, mainly because I had been told it can foster something of a conceptual body of work, so I had visited last year and loved what I saw. What had really assured my choice was Chicago itself. I took notice of what Chicago is, a hub for the arts. Some of the best up and coming designers, artists, musicians are coming from the city of Chicago, maybe Chicago can be what Florence was in the Italian Renaissance, or Paris in the late 19th century. I wanted to be with like-minded, ambitious creatives that wanted something more, Chicago yields that and I feel that if I am creating in a space surrounded by those with drive and those that are trying to do something different it could result in a betterment of my work as well as hold better opportunities to share my work with the world.

Also, why did you feel the need to pursue a degree?

I don’t necessarily believe that I need a degree to make this all work out, it is more of the fact that I still believe I have better work waiting, I know that I still have a lot to learn, its why I study late artists and geniuses that have held importance in the fine arts. I could choose to work on my own over the next four years instead of getting my bachelors, but I feel as if the next few years of my life will be most productive by challenging myself, I’ll be stepping outside of my comfort zone in some courses and it won’t be a walk in the park at some points but that’s what I’m searching for by getting a degree, I’m just trying to push myself harder.

Do you feel like college will hold your creativity back in any way?

In some ways it might, I won’t be able to work strictly in my typical body of work. However, instead of just jumping right onto the canvas I can refine my ideas, compositions, and techniques. Maybe some professors I have might not appreciate my work in the same way others do but its not like that’ll push me away from my work, I’ll hear what they have to say and move forward, I’ll still be creating outside of classes, I’ll still be expressing myself in the same way I am now, I’m just honing my craft.

I want to get into the backstory of a couple of pieces I really enjoy of yours.

First, “Defamation of the Natural Psyche”

Defamation of is the natural psyche is my interpretation and depiction of the medicated society we inhabit today. The United States is one of the most highly prescribed nations in the world, its commonplace for anyone to be on a psychoactive medication for any illness when being treated. Its as if they’re being worshipped, many will see this as the end all be all of treatment for their illnesses yet fail to recognize that while searching for an end to their troubles it cant simply be solved by their medication, I mean less than a third of individuals who take these drugs are actually sitting down with a mental health professional to deal with these issues. Whether it be Prozac, Adderall or Xanax that you believe that can bring about a psychological salvation to your life, there shouldn’t be this glorification for them like we’re seeing. This isn’t me saying that these drugs aren’t effective for many, in a lot of cases you do see a positive impact, I was medicated when I needed and it helped in the short term, more of the driving point behind this is that when a 15-16-year-old kid has nothing on their mind besides a means for end that there’s something inherently wrong and that medication isn’t going to solve the struggles they might be enduring at home or school, so look at meds as the way to first treat their illnesses, but its incredibly important to be looking at lifestyle and learning to coping mechanisms to deal with natural emotions and disturbances or making steps to improve environment and not simply falling back to a prescription. 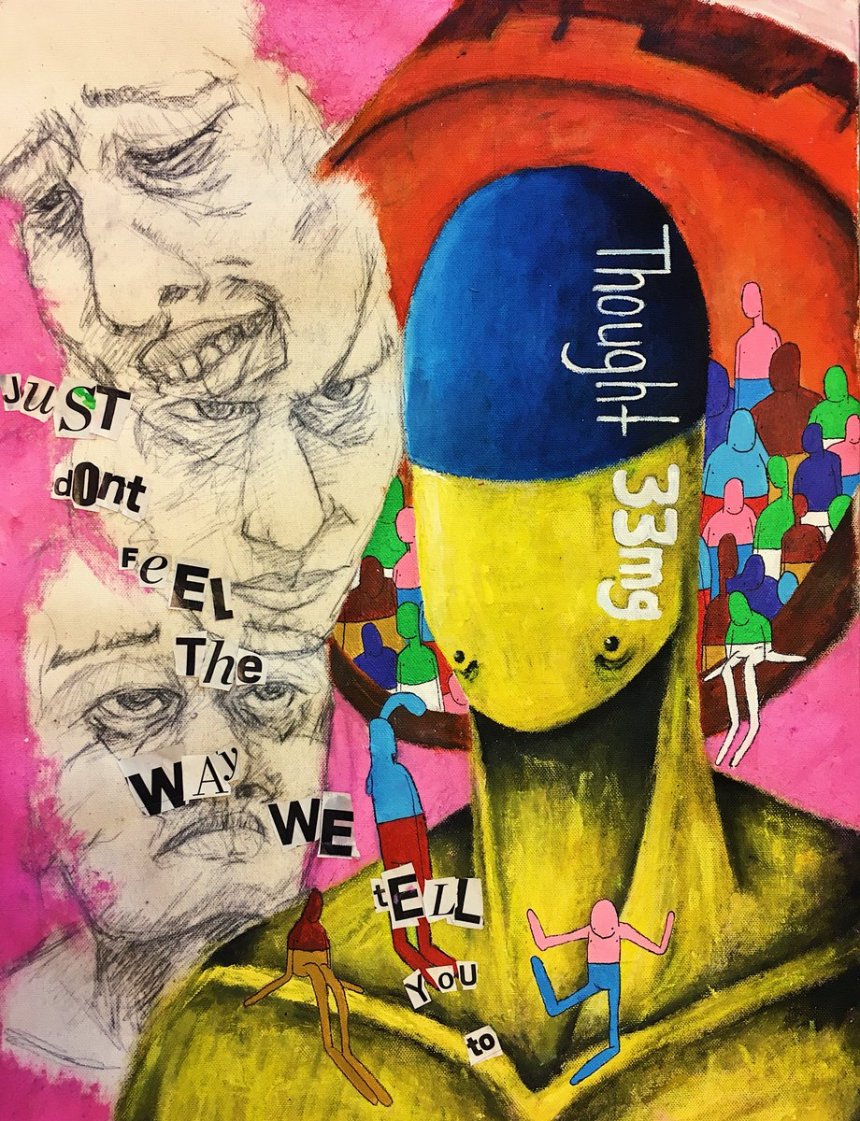 In a lot of pieces, if you look into them, there’s a theological prevalence to them, including ‘False Idols’. This piece is personal, it’s more of my experience and beliefs with a so-called higher power I suppose. I’m not Christian, I’m not Muslim, I’m not Jewish, I’m not Athiest, I don’t have a faith, it’s something that I’m speculative of and something I ponder on a regular basis. I’d say that if there is this omniscient being that controls existence then we’re simply existing in the same space, and at times they might check my fate in order to steer me in the right direction, but it could be just this, there could just be life and coincidence then the dirt. All that I can say is that I don’t know what is going on in a higher realm or if it even exists, nor do I believe that we ever will or can comprehend something of that nature, I won’t fight it, I won’t rebel against it, I’ll just exist in my own right. “Superstition did not bring me to this point, yet I don’t dare tamper with it.”

Lastly, “but does it listen when I pray?”

This piece is more of a conversation about the act practicing religion, specifically, as the title suggests praying. There’s something about the act of praying that has intrigued me, its something that you see with every faith, a conversation in your mind directed towards some sort of divine power. You see the figure to the left in water color, its a depiction of some sort higher power I suppose and with the smaller figure praying to it. The figure in purple is rendered a bit more realistically in value opposed to some of the other figures that come across in other pieces to display this sort of enlightenment, being real, being closer in touch to reality opposed to more simple figures that seem to be in their own world. The whole piece is really just pointing out the obscurity of this tradition, where you’re sitting down and conversing with some sort of god in your mind, telling it your plea’s, hoping for reform in your life and trying to be cleansed of your sins, but is it always listening to your prayers or might it just be standing above you. 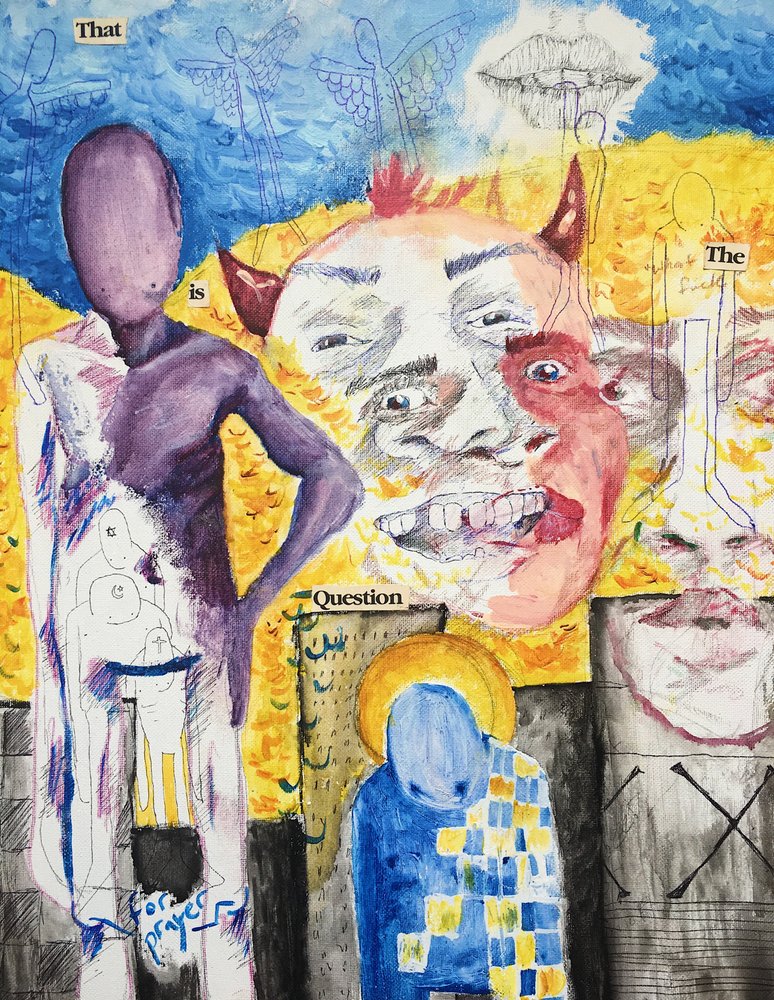 If you could be apart of any art period/movement, which one would it be?

I wouldn’t want to be part of any other period besides right now, whatever period this might be. I’m proud to be working at the same time as creatives that are striving to be unique and have a distinctive personalized style while still being able to appreciate and encourage each other despite whats on the canvas. I don’t know how history will view us but I am interested to see how we will stand the test of time.