What’s going, my name is Austin Aldridge. I am 28 years old, born and raised in the Southside of Chicago. I’m the Content strategist for All Summa

A couple years back you were able to work Marketing at LDRS. Was that a big thing for you, especially growing up in the Southside?

Oh yeah. The feeling as a kid using my extra money to buy something from LDRS was amazing. I looked at LDRS the way a New Yorker might look at Supreme. It was that hometown feeling. I remember just thinking it was amazing we had something like that in the city because Corey was able to provide inspiration for a lot of us. I know personally because of Corey I thought maybe I can do this on my own. I can create something impactful.

Now you’re one of the founders of All Summa, one of Chicago’s favorite parties. How did this come about?

I was throwing parties in 2013 with some homies here called Yo Thursdays where we paid homage to old shit. Old times, old music, and old culture – but still bringing a modern twist to it. My cousin Dave, who is apart of All Summa, my homie Rick, and I would go to these parties out in LA. The vibe was crazy. The drinks were crazy. The girls were hot as hell. Every time we would go, we would tell each other, this shit needs to be in Chicago. We knew we could create something along the lines, if not better. 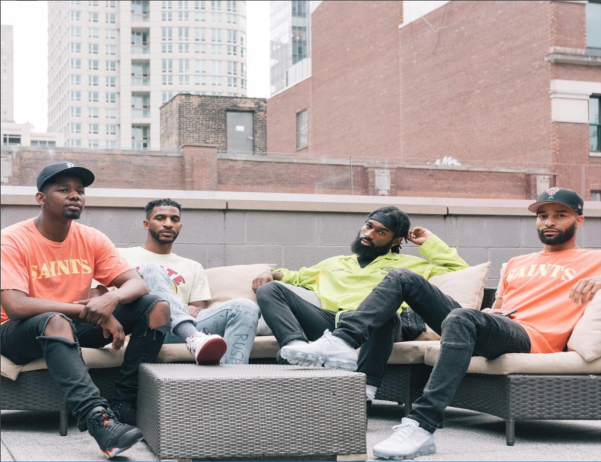 All Summa is more than just an event, you guys are a creative curating agency. What brands have you been able to work with?

We’ve been able to work with Nike, Complex, Sirandmadame, Soho House, Red Bull, and Courvoisier. We are starting to work with a lot more brands now.

I saw you were able to create an event with Jordan Brand. What was that like?

Crazy! I don’t appreciate those moments when I’m in them. It’s very hard for me to be in the moment. I move fast. I like to create something, give it to the world, and then I’m already on to the next thing. I hate that I’m not able to be in the moment sometimes because we all wanted the things we are doing right now. It didn’t mean so much to me because I want so much more. I’m thinking bigger. I’m looking for Michael Jordan himself to be in the party.

While you guys have been able to throw a ton of events, what has been your favorite event you’ve thrown over the years?

Chop Shop on Sundays. That shit is amazing. People are talking, networking, and just having conversations with each other. It’s an incredible feeling.

What’s the biggest lesson you’ve learned growing as a company and as friends?

To be an open communicator and talk about shit.

This year you guys talked about how you are embarking on a new chapter in your journey and working on plans to expand. With summer slowly approaching, what can we expect from you guys?

A lot more spreading our wings. I have promoter friends who get mad when I say we ain’t promoters. I tell them don’t ever feel like we are in competition. We want to work with more companies as well – like I stated earlier.

Recently you’ve been taking All Summa to different states…

Man, that’s one of the best feelings. It’s mind blowing how people view Chicago from an outsider’s POV. So many people think our city is filled with violence, dirty politics, and bullshit. It’s inspiring when people come up to us and are thankful for what we do because we aren’t here to promote any bullshit.

We are two weeks away from the halfway point through the year, what are two goals you’d like to accomplish by the end of the year?