Hey! My name is Brittney Perry, I’m 26, originally from Indianapolis, but now live in the city. I am the founder of PerryCo.

When did you start PerryCo?

I’ve always wanted to start a shoe company. I’ve had this idea since 2013/2014, while I was still in College. I was doing an internship at a pharmaceutical company and thinking long-term how I didn’t want to do this. Ever since I was a kid I had a passion for shoes. I was a tom-boy growing up but every time I’d go to the sneaker stores they never had options for Women. They had a small section for Women, while the Men’s section was the entire other side.

I had the idea to start my own brand because of the evolution of social media. A lot of people ask why I didn’t just go and work for Nike. While I wanted to, I wanted to create a product that was Unisex and had a minimalist design. After a couple years of wanting to start the brand, I finally actually did. Using the resources and social media, I was able to connect with the right people to help actually get my sneakers physically created.

Your company was created with the mentality of changing the perception of the sneaker industry – how do you look to do that?

I look to change the perception of the sneaker industry with my company by creating in gender neutral ways. I want to create sneakers that are versatile, but still me. As far as making it Unisex, there aren’t going to be a Mens/Womens sections on the website, you’ll just see ‘Shoes’. I’m starting to see a lot of companies go that route. 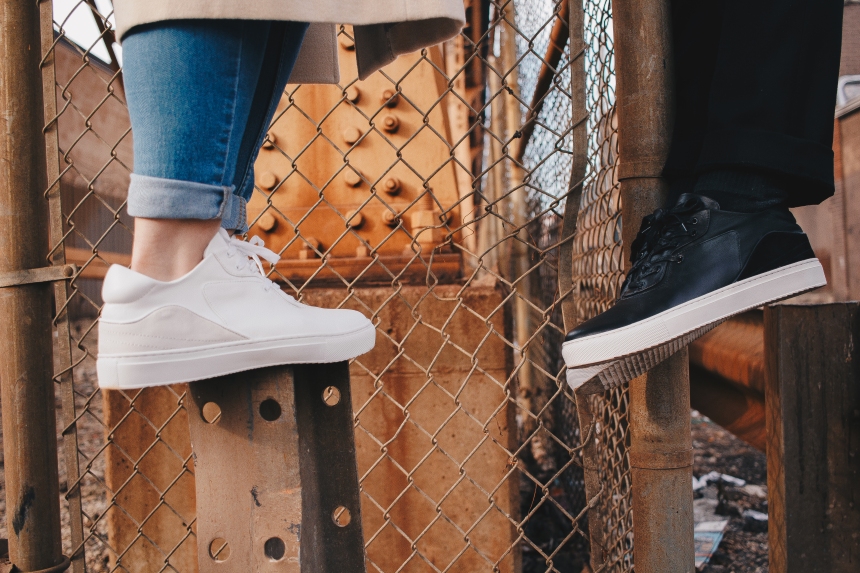 It was super stressful. Throughout the journey, I had around 12 different sketches to choose from that I threw out. There were a few that were more technical in the design aspect, but I wanted to keep the first shoe more simple. Just to brand myself. As far as actually getting the sneaker made, it took around a year or two. I would be going to back and forth with the manufacturer. Trying to get the actual visual product made how I want it to be made – I almost quit a few times. I was like fuck it, I honestly don’t know how I’m going to get this done. Financially, shipping the samples back and forth. I just didn’t know if I was ever going to make it. But after two years, I got it to work.

As you look back do you appreciate the journey?

I appreciate the journey a lot. If it was just so easy I don’t think I’d be in the same position that I’m in now. Throughout the journey, there are a ton of obstacles and self-doubt. But you grow during those harder times. You have to always believe in yourself, your product and your vision.

Knowing you have such a love for sneakers, what was that feeling like when you created and put out your first pair?

The feeling was amazing. All of the hard work that took place over the years was worth it when I got that final product. It was a high. I was like holy crap, I spent so much time designing and developing these, and now here’s the actual product. Seeing that first purchase and then on people’s feet motivates me to go even harder.

While checking out your shoes, I see the minimalist design throughout. Is that something you’ve always been interested in? Or do you think it’s something shoe companies are lacking in?

I think it’s a mixture of two things, 1) I love minimalism and 2) I wish it was something that brands would do more of. Me personally I like minimalism because I can wear the shoes in different environments. In all honesty, the minimalism comes out of wanting to create a staple product, similar to a Nike AF1.

Last fall I saw that you were able to have your shoes in Sheila Rashid’s show at the annex. How did that come about?

I liked some of Sheila’s pictures on Instagram, maybe a year or so ago and she went back to my page and said she wanted the shoes I was creating. At the time I wasn’t finished with the design yet, but then a couple months later she reached out to me and told me about her fashion show in the fall. She asked if I wanted to sponsor the show or if she can buy my shoes for the show. Since I was still up and coming I told her I’d love to sponsor the show. I talked to my manufacturer and was able to get 20 pairs made. Being in that show was amazing. I’m very thankful for Sheila for that. Even though she has a huge name here in Chicago, she’s really about helping others and giving back.

As you progressed over the years, what’s the biggest lesson you’ve learned running a company?

I’ve learned the importance of having drive and determination. Starting anything from scratch is going to be very hard. You just have to be patient. You won’t have all of the finances for it right away, but just do what you can.

Rumor is you’re already starting to work on the next shoe. What’s the next sneaker going to look like?

I’m actually doing a collab. My friend Amanda runs Runwayaddicts. They’re having a denim show with all of these denim vendors. We decided to make a denim shoe for that. I’m having a denim shoe and a pink shoe with a gum sole and white sole. I wanted to add some color and variation in there. Later in the year, I’m going to be releasing a high top and in the fall there will be some more colorways.

We are quickly approaching halfway through the year, what are some goals you want to accomplish by end of the year?