I decided to go and find five of my favorite drawings of Cam Collins. I gave Cam the title of the drawing and he gave me the meaning of the piece. Read below!

This piece was done at a crowded time, I think this is one of the pieces I would never recreate in any kind of form — I wouldn’t want to recreate any of them, but this piece, in particular, is very specific to a feeling I had. To me, it’s simply a picture of an office and the actual dynamics that an office has in it. Maybe it’s not everyone’s idea of one, but this office is a purely paper office, there are lots of cuts and nice things made, and the view from the window is only ever meant for breaking and entering, no one looks out the window in that office. There is a guard, but he loves the girl in the office and plays the guitar every day to show his colors. The sounds he projects, however, are the same as the printers the office uses, and the girl knows those all too well. 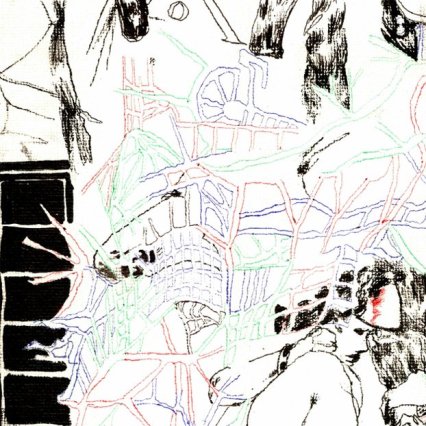 Action Doll (Yellow Edition)
This piece was a recoloring of a previous one I did originally just titled “Action Doll”. In the original, I focused on atmosphere and how much I liked circles at the time. I really wanted to just draw pink circles. Not in a repetitive way, but I had been looking at a lot and decided to look at one that I made, so I that’s really where this piece came into play. The old man in this piece is evil, I only show that from the lighting, but if one were to see him as just a regular man, that is good too, because he is. The pills on the trees are put into people’s heads so that more children can be born from the mind. All the people that come out of the head carry the similar traits or memories as the birther, so they are just mind children. The girl with the black outfit makes toys and is the holder of an “action doll” which is essentially just a play on the contrasting idea of what an “action figure” and what a “doll” is made for. I recolored this yellow because I just wanted to see it with more yellow vibrancy instead of the soft tone the piece kind of had — there was not much presence to it, even though in my head it seemed kind of dramatic.

Amiga
This was a purple piece, and some might know about my relationship with purple, but purple and I are not too good of friends. I don’t know what it is about it, but it has a presence. I wanted to try to use the color for this piece and maybe find something that would make me like the color, and I think that was a success. The main factor of this piece is oil, the mental filling it usually has, and the people that stand out, even if they are covered in oil. In this piece, there are lots of people who are able to stand out, but the main character is Amiga, the girl who holds a chain sphere that carries the devil in it. I was very much inspired by the actual logo for the 1985 Amiga Personal Computers to actually keep doing this piece and is the reason most of these things exist in the piece the way they are. 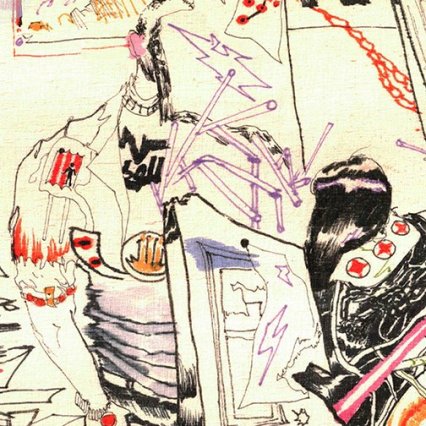 SERA
I hadn’t really made a machine before, and if I ever did it ended up being made out of humans. This time I was very dedicated to just making a solid mech-esque thing so I could look at it. The final result ended up being, according to my friends, more like a monster of some kind, but they saw the robotic aspects of it. One even likened it to Final Fantasy VI “magitek armor”, which I was very happy about, it’s one of my favorite games of all time and it’s definitely something I feel subconsciously guides me through any kind of artistic decision I’ve made since I’ve played it. In the end, I couldn’t resist the piece having a person in it, and I wanted SERA, the machine, to be a present for a girl of the same size. The ambiguity of its size, it’s function, and it’s shape is something that I like the most, and I consider it one of my most resolved pieces.

BOOMWALK
This is just a piece about target practice. That’s really all I want to say about it. 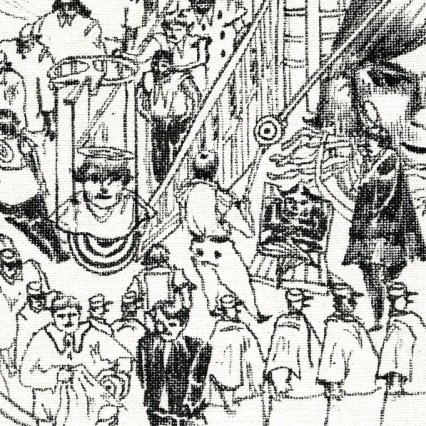