I see that you guys are having Beyond The Sidewalk do a showing before you guys premiere the film. Was your guys’ film inspired by Beyond the Sidewalk?

No, actually not at all. When we started the trip in 2008, Jack Smith, who was featured in Beyond The Sidewalk, reached out to us and said he did this back in the 70’s and wished us luck. Over time we continued keeping in touch with Jack, and when he let us know about his film, we figured we should have him show his film at our premiere on the 24th. It will be a good lean into the cross country of travel and skateboarding. Kind of like a passing of the baton, ya know? From the older generation to the newer generation.

After the trip, you guys were struggling to put it together and then abandoned the project. What led to that?

We were inexperienced in filmmaking and it was a lot to take on. Some of us were in school and working part-time jobs. There were only two guys making the actual film. When we looked at the first cut, we realized it was very bad. We weren’t telling the true story with that first edit…so we abandoned it.

Eventually, Arthur and I got into the industry. I started working at The Travel Channel and Arthur started working for a company and creating video content. Our experience taught us how to structure a story and edit a piece. Even though we abandoned SHRED, Arthur and I would always talk about it. It was on our minds every day. We would always keep the conversation going and throw ideas around. One day, Arthur reached out to me and was like, “Dude, we really have something here, I think we can really put together a film.”

The first trailer premiered in 2008, now 10 years later you guys are premiering it. Did you intend for that to happen or just a crazy coincidence?

That definitely was a coincidence. We actually wanted to put the film out two years ago but it took us a while to find a music composer that would work with us and it took about a year to score the film.

It took you guys a month and five days to complete the trip. What was the worst experience you guys had along the journey?

There were a lot of bad experiences, haha. We fell a lot and got torn up due to the asphalt. James ended up in the hospital with thermal burns due to the asphalt cooking his leg. We got chased by farm dogs too. But, I think the worst experience for me was actually getting to New York. In New Jersey, we rode down Route 1 and Route 1 turns into this very busy highway with no shoulders. We ended up stranded on Route 1. James ended up almost getting hit by a car. The car sideswiped him a little bit and James freaked out. A cop ended up showing up due to getting reports that we were skating on the highway. The cop told us to get off the road and that really screwed us. The last 10 miles into Manhattan ended up being on a train. That was the most dreadful experience for me, but at the same time, it added beauty to the film because you might get to your end goal a different way than expected.

In post-production, Arthur and I were toying with the idea of going and recreating that footage that showed us arriving on our boards in Manhattan. We didn’t want to do that, we wanted to keep things in the moment and show exactly what happened. If people are disappointed about us not rolling into Manhattan with that epic image they had in their head, then I don’t know. Some people may view it as a failure, however, we see it as an accomplishment. It wasn’t about the destination, it was truly about the journey. It sounds cliche, but it’s the truth.

Throughout your guys trip, did you ever feel like giving up and heading back to Chicago?

No, not at all. A trip like this makes you feel so accomplished. You feel like you have something to live for. You’re out there in the elements and doing something that you feel good about. We just had so much ambition that there was no way we would turn around. 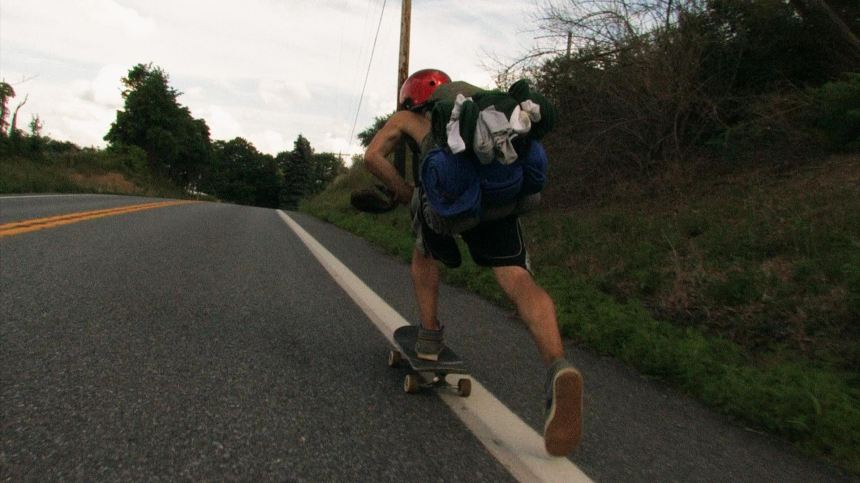 This Saturday, March 24th, you guys are premiering the film. What can we expect?

What is one message you want people to take away from the film?