When did you first get involved with art?

Ever since I can remember. My mother claims that I was about three years old when I first started to create art. I continued this habit growing up through grade school where I would draw black & white portraits of my friends, landscapes, and even Pokemon & Dragonball Z characters. In 6th grade, this imagination led me to win 3rd place in a fire prevention poster contest in the state of Iowa. From then on I knew I only wanted to be an artist.

How did you then make the transition from Iowa to Chicago?

While in high school, I was one of the only people making art. I took a few art classes at our community college. One of my teachers at the time, Sara Kendall, was really pushing for me to go to Art School. So I left Iowa in 2008 and moved to Chicago to attend the Illinois Institute of Art, majoring in Graphic Design.

You decided to switch from digital and graphic design to urban/street-based art. What caused this transition?

After college, I was working for a marketing company. During that time, I was living in Logan, and taking the train to and from work I would just constantly see street-art. While at the job for two and a half years, I was starting to move up in the company. But once that time hit, I was sick of the job and left.

So during that time, where I would come across street art constantly, and looked up to guys like JC Rivera and Sentrock who were making waves throughout the city. So I decided to get back into my roots with drawing and painting, then edged my way into displaying my work in local art shows. That transition from graphic design to street art is something that just really occurred naturally and organically for me. Luckily for me, a hobby of mine was able to blossom into an actual career.

Describe your artwork in three words

Groovy, Trippy, Psychedelic, and Wavy if I had to put in a fourth one. 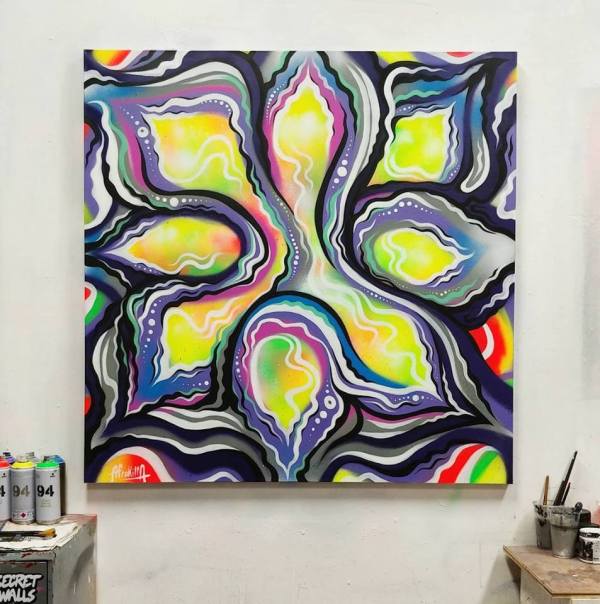 If you could work within a past art movement, which would it be?

To be honest, I’d say around the 70’s-80’s during the Andy Warhol era. That time is so inspiring to me because physical things being made were starting to transfer into a digital format. Would have been cool to see that process come to life and learn from it first hand. (Shoot, just missed it!)

Favorite artist to work with in Chicago?

Man, that’s a heavy one because I’ve been collaborating with so many locals, especially lately. But I will take this opportunity to give a shout out to Good Doods Studio. My guys Julius Torres and Marco Miller we’ve been building out our studio in Pilsen for about 8 months now. We work in fabrication, setting up events, and doing launches.

Other people, I’d say my favorites are locals that I respect and have respected for a while now. Doing Secret Walls last fall with JC Rivera was fucking awesome. Also, during that time I helped Jeff Zimmerman with the Kerry James Marshall tribute mural at The Cultural Center. That was an unbelievable experience. I got to meet and paint with Kerry as well as learning rare mural knowledge with (in my opinion) Chicago’s best muralist, Jeff Zimmerman!

I’d say my favorite project I’ve ever worked on was last fall, I created this huge skateboard installation that I live painted at the House of Vans. It is a 4 foot by 4-foot wooden panel with about 20 recycled skate decks drilled together. A lot of the decks were oldies that I skated, some were my friends, and I even went to Uprise skate shop to get even more. The project became this communal piece in a way. This was my favorite because I did it purely out of the love for art. It wasn’t a commission, it wasn’t something someone else told me to do, I just wanted to do it. 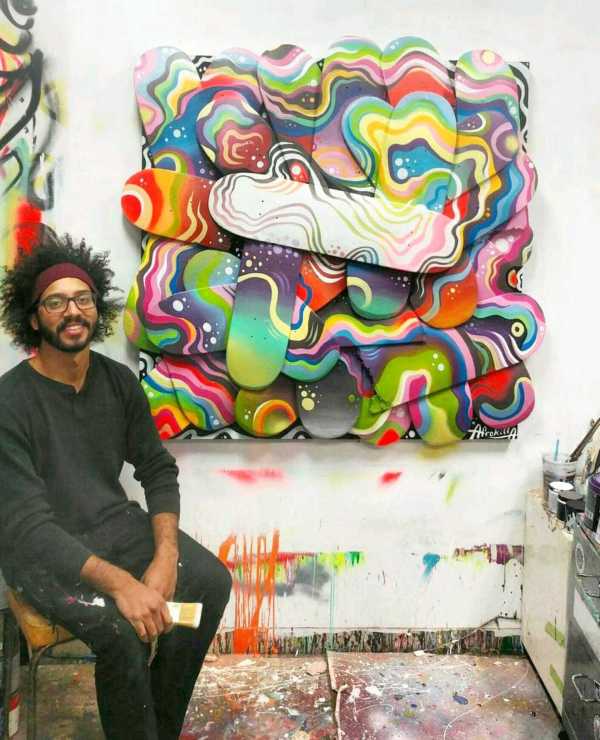 That line, in particular, applied to this new Yoga studio (Livity Chicago) that I worked with. During this time I was creating a lot of art using Buddhist symbolism in making mandalas and mudras. You know, very spiritual things. Finding focus and balance. I want people to take time to appreciate something more things and apply that to whatever they’re currently working on. I want people to find their inner peace and happiness in what they’re doing in life, no matter what it is.

Do you like viewers knowing the meaning behind your pieces? Or do you prefer it being a mystery?

I like both. It depends. When I create my abstract work there’s not really this huge meaning I have behind it. The waves and whatever else you may see in my abstract work is self-expression. With that, people can take from that and make it mean whatever they want.

Other pieces, I like having viewers finding meanings behind them, like the mandalas and mudras, or the round pillar I did for Google. The colors and shapes I used applied to the environment around the art, making it the missing puzzle piece that the spaces deserved.

How was your time with YAB & crew?

Working alongside Matthew Hoffman and the YAB crew for nearly two years really taught me a lot. During my time there I was exposed to Chicago in a whole different way. I got to see how communities come together (physically and virtually) and learned a hell of a lot about production.

I even took the YAB brand to my hometown of Creston, Iowa and lead a mural execution there. A giant 30 foot “You Are Beautiful” mural can be viewed on one of the main roads in town. And I’ll always remember when Matt gave me my first set of spray paint. Overall, my time there definitely prepared me for being the artist that I am today and I’m thankful for that experience.

What musician would you love to make a piece for?

-Definitely Jimi Hendrix. If he was living, I’d be bugging him nonstop.

-College me would say Dan Deacon or Animal Collective.

-Right now though, I’ve been listening to a ton of future beats, soulection type stuff and I would love to collaborate on something groovy with them.

2 replies to Get To Know Keith Smith aka Afrokilla