Hello everyone, my name is Cj Hungerman. I was born in Pittsburgh made my way to Chicago and I’m an artist.

When I was a child, I’d say around 4th 5th grade, I started drawing. That just stuck with me. I always enjoyed art more than all of the other subjects. I also got into music and as I look back I’d say music and art dominated my childhood.

When was the moment you realized you were going to pursue painting as a career?

I had some issues in the late 90’s. Before I started to get off track from creating art, I had been adjunct faculty at a variety of colleges and universities but when the economy took a drop I lost my teaching jobs and began working in a bar as well as drinking everything in the bar. Then I lost that job and had to get sober.  When I entered back into the real world I found a job as a dishwasher and worked my way up to become a Sous Chef.  The owner of that place was as big a drunk and drug addict as I had been so that business closed.  At the time I had a wife that was 6 months pregnant.  There were no jobs that would pay enough money to live on so I started creating art to sell. This was a huge bet on myself so late in life…. and I am still betting.

What were some early struggles in your career as an artist?

As life went on I got married and had two kids. When my wife and I had our first kid, I lost my job and we were both put on welfare. We had to go on the link card and WIC program, which is embarrassing to deal with but made my art better. Being that poor is a situation I do not want to repeat. It was a time not having a lot of stuff and moments when I wouldn’t eat so my wife and kid could eat.  I tend to forget about the beginning of my career because as the roller coaster goes up, it comes down, meaning some months are good, some months aren’t, but as a family, we fought through that and it shows the character of who we are. My wife is an amazing woman who has supported me. Without having a support system, you can just lose yourself.

You’ve been working for yourself now for 10 years. Did you ever once think about going back to get a job?

There was no turning back at a point because of my age and because I had a kid. Also, no reason to get some job just to pay for daycare. Since my wife had found a decent paying job we ended up switching ‘traditional’ roles, she was the breadwinner and I was the mom. That was very difficult for me. I had no idea what I was in for…

You describe your artwork as visual riot…

I call my studio the ‘art hole’ or the ‘dungeon’. It’s dark, there’s no heat, there’s no A/C. But, the artwork I do, I love doing. The colors remind me of the 80’s and the psychedelic pop era I grew up in. The shapes and colors abstractly represent my wife and my children who deal with my daily insanity.  The uniqueness of my art is from the successful use of dissonant colors and flat shapes to create the illusion of a three-dimensional surreal environment.  The melody of colors and intermingling shapes represent the diversity of people in my family and friends that I know.

You once said, “I hope we get to a point where our artwork isn’t so precious” Why do you think that?

When I was a teacher, I would stress to young students that what you make is going to be precious to you in that moment in time and maybe a year from now it won’t. But if you find it precious forever, you’re not going to take a chance to do something greater. Every day you have to evolve.

Why do you think no one can give an artist advice unless it’s simply technical?

Art is someone’s personality. It’s ALL about that person.

While scrolling through the internet, I see you always working, or having a gallery show, etc. Do you ever feel the need to relax and balance? Or do you like the compulsive drive?

That compulsiveness is what drives me. I started working in factory like jobs during the 80s in Pittsburgh. I approach my artwork with a factory like mentality. I’m in the studio every day. You have to make it a regiment. Some days I won’t even be making art, but I’ll be in the studio just cleaning everything. I have to always be working. We as artists don’t have a union to help us through the hard times. At least we do not have a union like the welders, pipefitters, and contractors I have such great respect for.

It’s about looking at what is going on around us. While my paintings are created with conflicting colors I make them harmonious, as I wish we could be as a people… but today in this political environment ….there is only hatred, deceit and miss trust. We certainly live in the cradle sack of life. 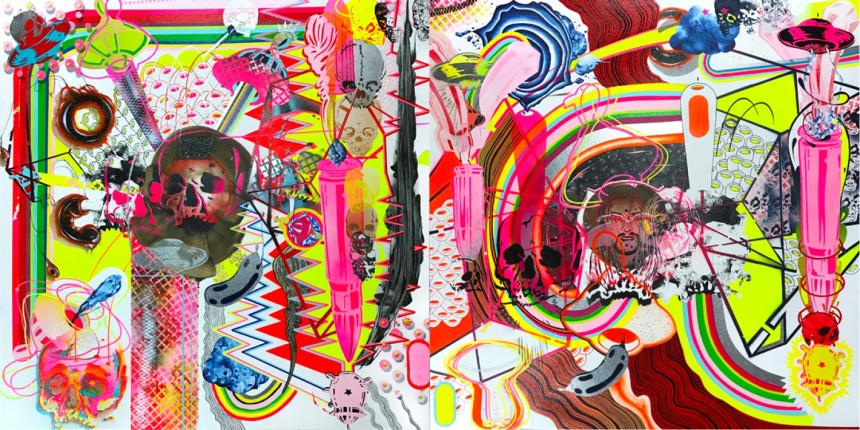 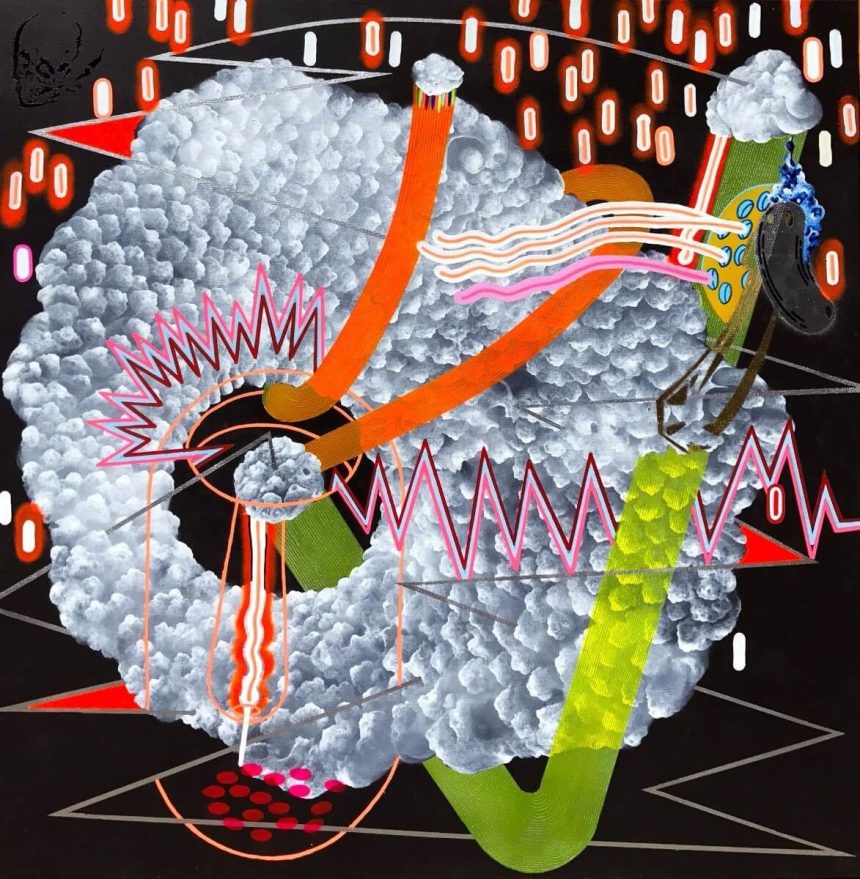 Favorite thing about being an artist?

I love the freedom of producing and creating for myself. I can do what I want when I want.

Favorite project you worked on?

I’d have to say the Chinatown Library.  This was a 500 square-foot mural commission by Mayor Rahm Emanuel and the city of Chicago.

Terry Winters. I fell in love with him in the 80’s.

Favorite artist, you get to work with?

Dominic Sansone. That dude is one of the best sculptors I have ever worked with.

Favorite color you like to use in your artwork?