My name is Jason Brammer and I have been a full time working artist in Chicago for the last 16 years. I make paintings, drawings, mixed-media installations, and murals. I have done multiple concert posters for My Morning Jacket and one for Robert Plant. I also do a lot of custom artwork and have been commissioned by the city of Chicago to create a mural for the Rogers Park neighborhood and by numerous other clients, including LinkedIn, Dark Matter Coffee The Boiler Room, and Hulu. I also play music to accompany yoga classes and, as of January 2018, I currently am performing at three studios a month (Zen Yoga Garage, Midtown Athletic Club, and Yogaview). These performances are “sonic soundscapes” and I aim to sync the practitioner with the sound of the breath using a synthesizer and looping traditional African percussion.

I do not have a specific memory of getting involved in art since it seemed to be an ever present element in my formative years. My mom is an artist, so there was always art material around to work with. I was always drawing in church and school and would draw rock bands on paper placemats at restaurants when I was a little guy. Once I was in high school, I was introduced to the airbrush by an incredible teacher named Glen Litts. I also became deeply immersed in classical figure drawing when I was around 17 or so and took classes at a local drawing center in Indianapolis, Indiana.

Before you made your stand within the art industry, you were rocking and rolling and touring the United States with your band Old Pike. Do you miss the days of being a touring musician?

I do not miss those days but we sure had a lot of fun and played tons of shows. We were on Sony Records, so it was a big deal for us to go to New York perform for the kind of dudes who wore sunglasses inside and would buy us exorbitant dinners in the lower east side of Manhattan in the late 90’s. We played the Bowery Ballroom (NYC), the Fillmore (San Francisco), Lounge Axe (Chicago) and many others in between. Touring is a great way to see the country and meet people. I would highly recommend it to any young musician. It’s been fun to see other bandmates continue performing like Carl Broemel, who is the now the lead guitarist for My Morning Jacket.

You had recorded some songs at IV Lab studios and then eventually you created one of your largest installations for them. How was that experience for you?

Creating the installation for the IV Lab was a true gift because not only did they hire me to create a fully immersive mixed-media work of art for their lounge, based on a sonic mythology that I made up, but I was also gifted a looping pedal, which led me back into making music after many years. I have recorded some songs there and plan on returning to make more music in their incredible studio.

Following the music career, did it only make sense to dive back into your artistic journey?

I was painting residential and commercial murals off and on for years, so after our band split up around 2000, I just focused more on that, working with interior designers and builders. I eventually acquired an art studio space in the Ukrainian Village, where I resided for nearly 10 years and began to paint paintings around that time.

I want to get into the meaning behind some of your artworks. Recently you did a piece called, Navigating The Waves of Being. What inspired this piece?

The term “The Ocean of Being” is a phrase that I heard from an Alan Watts lecture from the 60’s and I added the wheel element, so the painting became “Navigating The Waves of Being”. I had a solo show at Linda Warren Projects, which is a gallery in the west loop, with some of these works and had a soundtrack created by Carl Broemel. I was also inspired by the artist Hokusai, who is most famously known for his piece “The Great Wave”. My painting on cutout wood that you referred to has a wheel with 8 handles that is often used in Buddhist imagery to represent the 8 fold path, which is an ethical guideline for happiness. I was inspired by Thich Nhat Hanh’s book, “The Heart of the Buddha’s Teachings”, which is a great intro to the path of Buddhism for those interested. I would refer to my spiritual practice as “secular Buddhism”, meaning I practice meditation and the teachings but do not have the same cosmological worldview as a traditional Buddhist. Another big influence on that piece and the body of work is Joseph Campbell, who was a comparative mythologist. Campbell got me into the concept of the “Axis Mundi” (the world’s axis), which refers to the still point around which all of the universe is rotating and has been thought of as a portal between the earthly and heavenly realms in various religious and mythological traditions. You can see examples of this work at jasonbrammer.com. 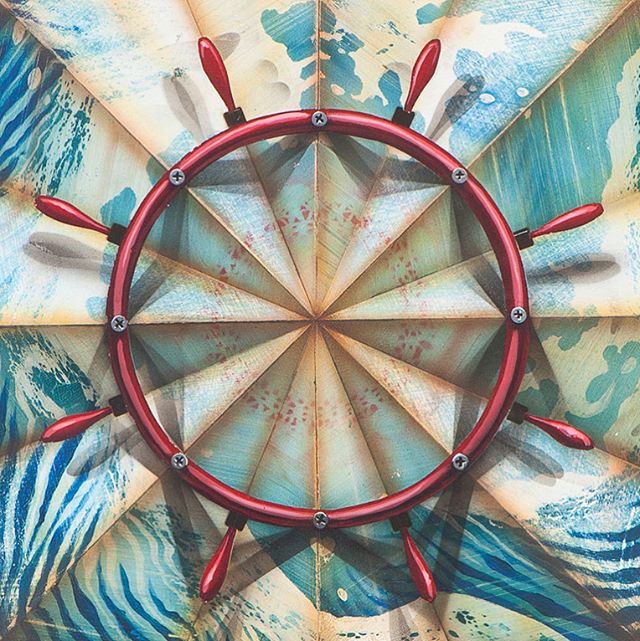 Next, The Fabric of Time (Dusk & Dawn)

“The Fabric of Time” paintings came about after many years of merging the surface picture plane with the view of an ocean scape, fading into the sky. The ocean is a recurring motif in my work and has symbolized different things at different times, such as the future, in a flooded post-human prophetic sense. 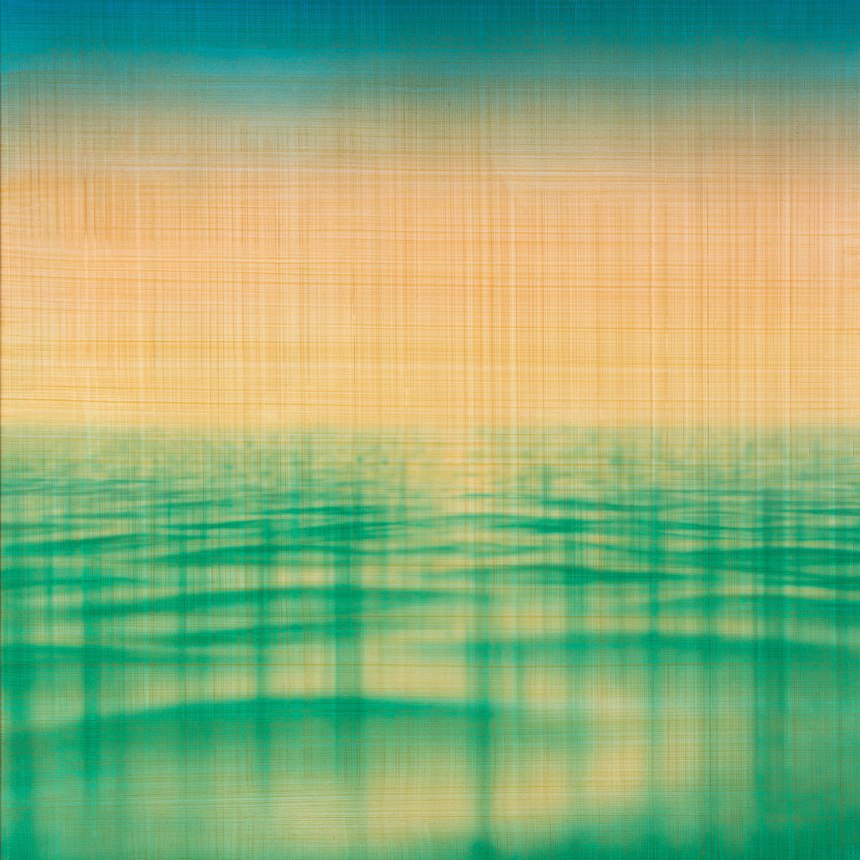 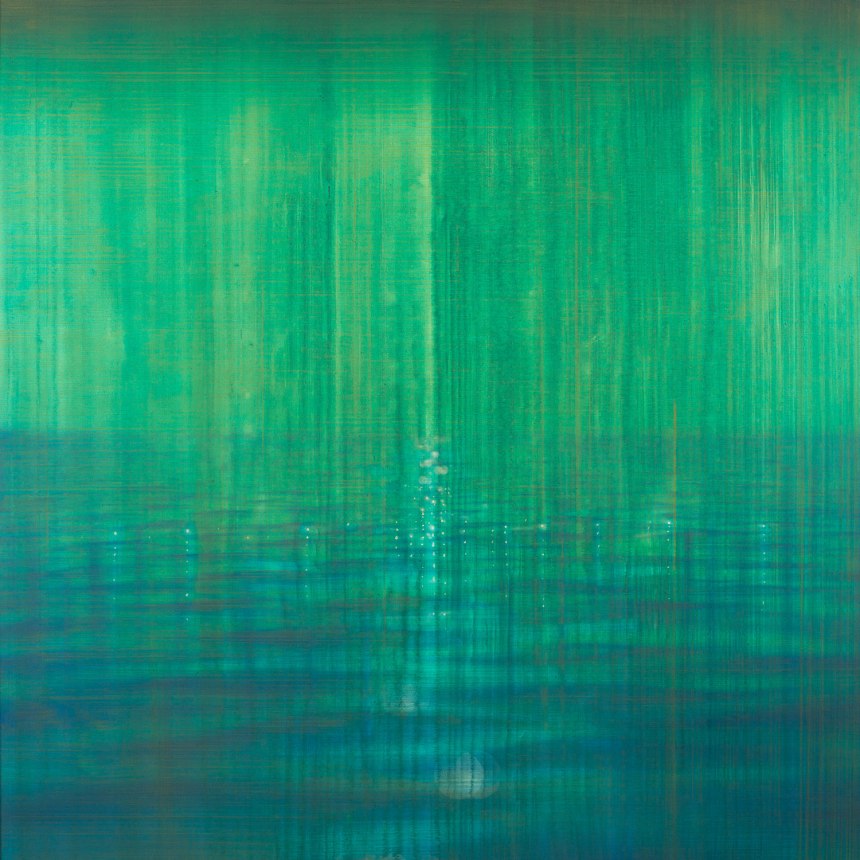 Gateway II (The Mandala Machine)…Speaking on Mandalas, I see you create a lot of them. What do you like about mandalas?

I am drawn to mandalas because they are representations of the inner life of the individual. After reading the brilliant Carl Jung, who advocated creating your own mandalas, I dove in. I love the symmetry and visual rhythm of mandalas. My series “Gateways” were all drawn on paper and reference various spiritual traditions. For me, mandalas began to deeply resonate when I was doing some partial fasting and intense yoga. Aldous Huxley’s book “The Doors of Perception”, explores how certain, familiar imagery is seen in various forms by people of differing religious and spiritual traditions. 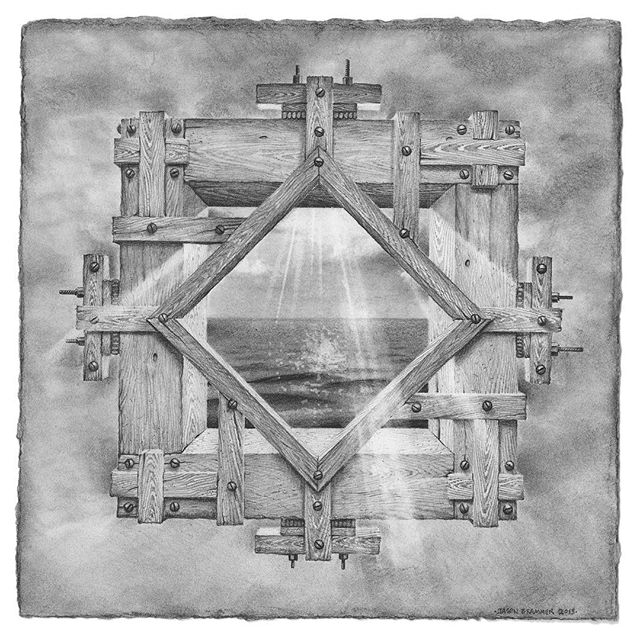 And last but not least, Broadcasting From The Pasture

“Broadcasting From The Pasture” is a painting that deals with time travel and ties into my ongoing mythological concepts of invaders from different times or realms. This piece is very closely related to my IV Lab installation, which deals with some type of alien entity that has time traveled into the past and is planting seeds that are growing and overtaking the pasture (which is a play on the word “past”). The first painting from that series is “The Future is Invading the Pasture”, so naturally after it invades, it sets up a broadcasting device constructed of antique parts to send out a signal. 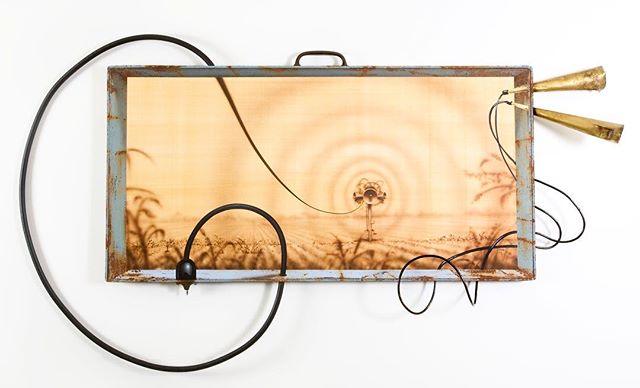 I saw recently you had Jimmy Chamberlin from The Smashing Pumpkins in your studio the other day. You said you’re creating a set design for an NYE party. How did this come about? And what can we expect?

Yes, Jimmy put me in touch with the Soho House for a project they were doing for an NYE bash. I am a part of a team that is creating a room that will pay homage to the Smashing Pumpkins video “Tonight”, so I had the pleasure of creating my own version of the imagery from the video on cutout panels. Their album “Gish” came out when I was a sophomore in high school and deeply into bass playing. “Siamese Dream” and “Gish” were my psychedelic soundtracks for a good portion of my youth, so it’s a real dream gig to create set pieces that evoke the mood of the Pumpkins.

If you were to describe your art in three words, what would they be?

Good question (haha)! Hmmmmm…..man……hmmm……well, I once heard someone say that Chicago artist Ed Paschke was “too generous” and I think that’s a pretty awesome way to leave the world. Who knows how anyone will be remembered? One of my mottos is “What you think of me is none of my business”, so I suppose I don’t really care because I won’t know either way (haha)!