Start typing and press
Enter to search
Skip to content
You started your company after setting up a goal of $10,000 Kickstarter campaign. You ended up exceeding your goal by almost doubling. When you saw that you made your goal, what was that first feeling you had? And who was the first person you called?

Watching the Kickstarter campaign be successful felt really rewarding, and I think I was mostly just speechless. The campaign was pushed over the $10,000 mark just 48 hours after launch while I was at my then-full-time job. I was surrounded by amazing coworkers and friends, who were the exact supporters to officially push me over the $10K mark so early. I poured everything into that launch and it was such a genuine representation of me that watching my personal dream come to life on such a public platform was really special. I probably called my mom first, we probably both screamed, or cried, or both — but it’s all still a blur.

The idea of starting Le Coeur was due to not being able to find a watch that fits your checklist. What do you look to bring to the table with Le Coeur that others don’t within your industry?

I was always frustrated shopping for watches because I could never find a design I really loved, let alone a brand that prioritized a philanthropic approach to doing business. When I first started, I saw Le Coeur as an opportunity to build my dream brand and incorporate a give-back component that I felt the industry was missing. Le Coeur is rooted in timeless European design and inspired by travel at large. While each timepiece is named after the city that inspired it, every purchase helps to serve the greatest need of one of our four seasonally-rotating partner charities.

We don’t take our customers’ business lightly, and never did I want the influence of their investment to stop at checkout. Our customers are making a transformative impact in the communities we call home as we reinvest in causes and organizations that are creating positive change in our world. The design and retail industry holds a lot of power, but we can also impact change for the better. I’m glad to see both shoppers and brands trend more towards conscious consumerism as the industry continues to evolve. 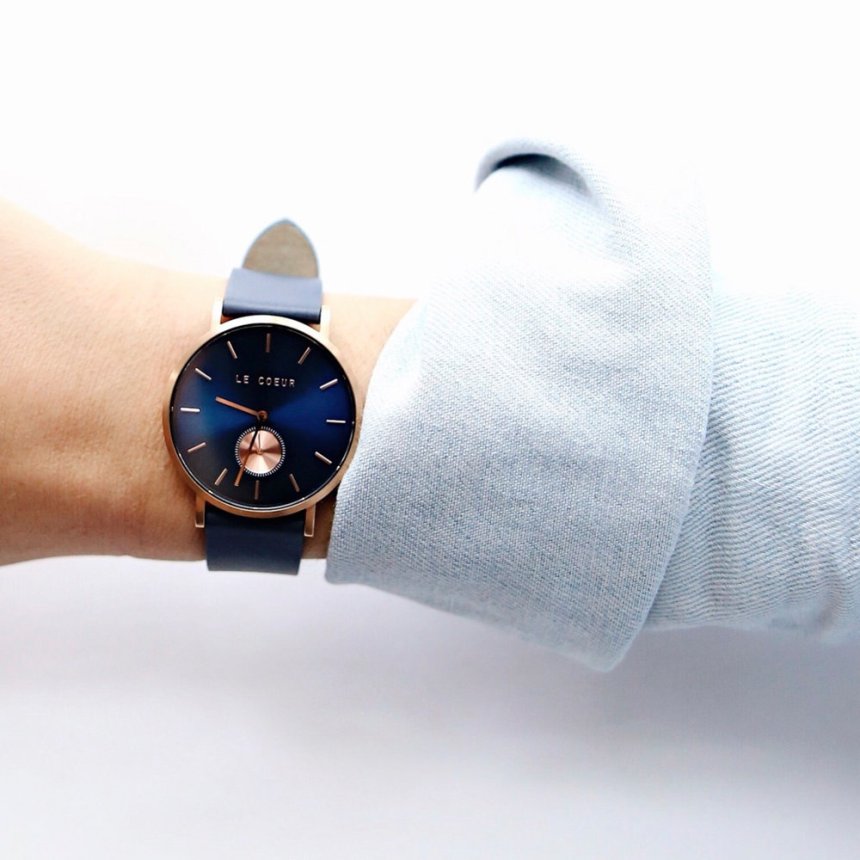 After two years of running your company, what has been your number one favorite moment?

This is such a joyful question. I’m not sure I can pick just one. Seeing my parents proud; seeing total strangers wearing Le Coeur around Chicago, and thinking of our customers around the world who believe in and are wearing something that came from my mind. That is absolutely crazy to me.

Do you ever get worried about smartphones killing the watch industry?

I love this question. And no. There may be some crossover, but I’m not sure the wearable techies are exactly our target demo.

I think there’s something really valuable about not always being connected, and the more we’re connected through and distracted by smart devices, the less we actually connect with the people right in front of us — even if this means ourselves. Le Coeur was never meant to be another distraction from the incredible life you’re living; it was meant to be a way to measure the experiences that mean so much to you, just another tool to serve you in living meaningfully and intentionally. It’s hard to do that if we’re constantly distracted from the spaces we’re in, right here, and right now. I think our customers know that Le Coeur is a connector; not a distraction from the lives that they’ve worked so hard to build and the people they’ve worked so hard to become.

One of the biggest lessons you’ve learned is that “Let the love drive you, and not the money. The money will always come.” Talk about the importance of this.

Launching and running a small business is far too demanding if you’re only doing it for the paycheck. I think now, more than ever before, sharing a genuine message about the vision behind a brand and why you’re engaging in its story is not only what helps cut through the clutter, but it’s what makes people believe in you and your business. There’s no way to consistently and successfully accomplish this if the paycheck is your higher purpose. No matter what it means to you or how it takes form, you can never go wrong if your purpose is what’s impacting the shape of your goals and dreams.

Each of your watches is named after cities that inspired the piece. What are some future cities you are going to be traveling to that could possibly be the next Le Coeur release?

After the busy holiday season and the new year is when I typically take some time away to disconnect and design, so I’m really looking forward to enjoying that space soon. I’ve always been inspired by minimalism and timelessness; subtracting all the nonessentials so that we can focus on what’s most meaningful. Over time, we’ve slowly incorporated more color and complex movements into the mix. I look forward to having the opportunity to progress and grow as we talk more about what we want 2018 to look like for the brand.