My passion for art had started from the time I was extremely young. Since I was a child, I always said that I wanted to be an illustrator/author. I remember begging my parents for those cheap art sets each Christmas or birthday and doodling for hours…I think I received my first art set around eight or nine years old. I always took it seriously but didn’t start honing in on my skills until I reached high school when I really knew that I would want to be an artist until the day I died.

Over the years, it looks like you were experimenting with a few different styles, but as of recent, it seems like you’ve found your lane with your afrosurrealism style….With that being said, I want to dive into the meanings behind three of your afrosurrealism pieces. First, Head In The Clouds

Head In The Clouds is one of my many pieces that focus on the loss of childhood dreams. It shows that thinking like a child when moving towards adulthood can truly make a difference in what kind of person you become. Growing up doesn’t have to mean conforming to society’s standards and giving up on what you hold dear, but it does mean letting your creativity and joy shine through as you age. People lose their inner child and think of their dreams as impossible feats, they forget how to live and enjoy life with no limitations. I was trying to show that there are other ways to live life to the fullest and achieve your goals…by living life through the eyes of a child.

No Surrender centers around the resilient spirit of an adolescent child. I wanted to show that getting through harsh times may bring with its bumps and bruises (hence the bandages) but the end result is what is most important. I wanted to give the young aviator a victorious air while still showing that he may have come across hardships along the way. He smirks just a bit to show the viewer that he is not defeated and will keep pushing forward higher and higher than ever.

Bitter End tells the tale of being a grown up and letting life get the best of you. Time and imagination start to slip away as quickly as it once came to you in youth. Some people lose hope and go into a dark place of anger and depression.

Bitter End shows the outcome of giving up on life’s wishes and how defeat will only engulf you… making you lose yourself in the process. The piece was meant to be a warning almost to never think of life’s limitations.

What message do you want people to take away from your art?

I want people to walk away with a feeling of triumph and inspiration. Inspiration to do things they had promised themselves before and to never give up on the fight in their daily lives. People are so caught up in life’s harsh downfalls and never take the time to think of its beautiful moments. It’s a ride that most experience blind and closed off, afraid of failure and disappointment. I want my viewers for just a moment to forget about reality and go back to when they were a child, filled with vulnerability, creativity, and a willpower to make anything become real.

And how do you make sure that message doesn’t get lost in the art?

I try to leave hints and clues in my art that tell a story that most people can relate to. I like to keep the sceneries colorful and bright so they are constantly seeing something new so that it’s a unique experience each time. By including hidden words of inspiration and hidden childhood tokens the viewer has no other option but to think of times of youth or other situations that bring with it memories of the past. I think of my art as very chaotic sometimes, but I think it’s organized enough in a way that directs the viewers gaze in the places I want them to see and think about it. I do this by giving some breathing space on the canvas so it’s not just muddled in one singular place, and painting portraits filled with expression and wonder. 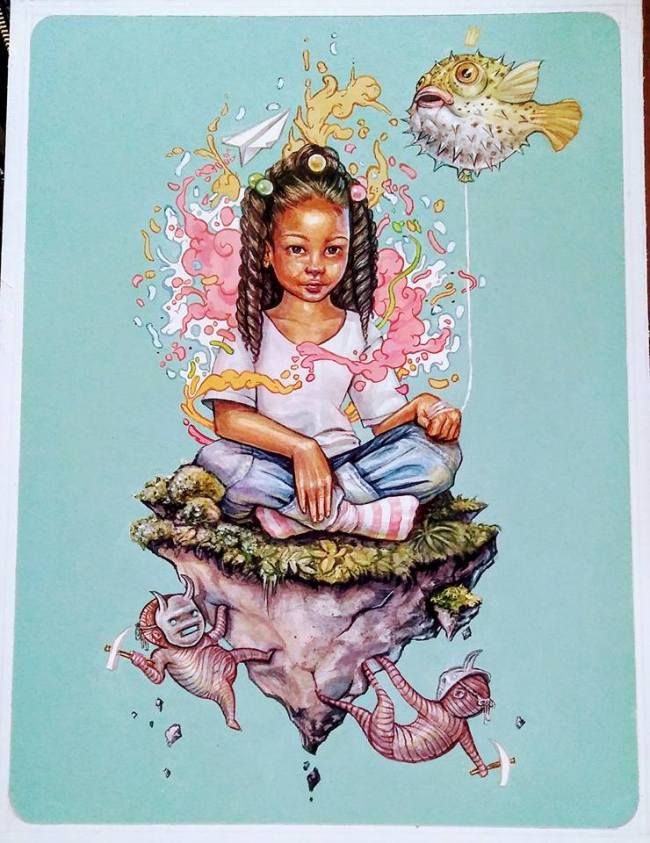 With just a few days left in the year of 2017, did you have the year you wanted?

I will actually like to say that this year was by far my best year yet. I know that may sound like a stretch but it truly was an unforgettable experience. I met countless new friends who supported me and offered me better opportunities that I never had before. My art has grown and so has my determination to get better and believe in myself. This year I found my niche in art where there wasn’t one before, and I can honestly say that I’m happier than ever. I’m surrounded by positivity and my art has taught me to keep a clear mind and hold on to your inner child and keep moving forward. So yeah this year was more than I could ever ask for. Thank you.