My name is Rich Jones. I’m a MC, vocalist, organizer and a friend. I’m from the Northwest side of Chicago and am 29 years old.

Life was cool. My father worked at the Chicago reader and my mother works at Northwestern. Previously to that, she was a musician and artist herself and toured. My dad, aside from working with the Reader, he was a writer + poet.  Between the two of them, in terms of musical and cultural influences, I had plenty. Aside from creativity, I was into sports as well- baseball especially.

I think I’ve always been creative. At a young age I was into drawing, but then I started writing when I was 14. Before that, I was just freestyling to myself. I remember one time at school I was waiting to get picked up by my mom and when I started speaking into my jacket (it was cold outside) it created a cool radio effect to my voice. I made up some bars and it was nothing special, but that carried over to when I would walk the dog freestyling and then that turned into me writing some lyrics on the margins of my homework. One thing kind of just led to another and now here I am, still making music years later.

What initiated you to make a start within the music industry?

As an 18-19-year-old kid, your world is your oyster, there’s not really any true sense of reality to ground you with realistic expectations. For me, I thought music was cool and I wanted to learn. It was all about how can I improve and get better. In a lot of ways, very early on, whether I was cognizant of it or not, when you’re a kid, things have more meaning. I was able to open up for Serengeti and Diverse one of my first early shows in college. That was a big look for me. I got to meet people that I look up to and now looking back, those sort of incremental things keep you excited to continue pursuing your dreams.

Before your solo career, you were a part of Second City Citizens

Second City Citizens came about because those guys were some of my early friendships within the industry. When I met Benny Nice, I met Bradley(sworns the ronin). We exchanged numbers, became friends, and stayed in touch. Bradley went to school in Indiana and I was in school in Wisconsin and when we would come back to Chicago on breaks, we would get up and make music together. In terms of SCC starting to pick up steam, it was my JR year in college and we did a release show in Indiana. The following year on a winter break, we were at a party and Troy Boy entered the picture. Immediately I was taken back because he had such raw talent. Troy could do things that Bradley and I couldn’t. I said to Brad, if this works out, once the school year is done, we should all think about making music together. The following summer we started recording together and making EP’s. As times went on, I was looking to really pursue my own music and I know other people had priorities as well. When SCC went on a break, I knew I wanted to continue pursuing my own solo career.

Let’s talk about your solo career and what led up to this years release, Vegas?

In 2013 I dropped a project called Three-Peat and I thought people were going to like it. Unfortunately, it just fell flat. The people that heard it, liked it, but it was just a jarring experience. Up until that point, I had such momentum with the shows and opportunities I was getting. Once you hit your mid 20’s, this is when things can stutter. All of a sudden things weren’t clear and my path got murky. For a good minute, I was shell-shocked and incapable of releasing music. Here I am, I’m working so hard and nothing happened. I crumbled. Luckily, I kept recording, was able to hit the road with Netherfriends and experience the country a bit, unknowingly getting myself in a head space where I needed to be to drop music and have fun again. This manifested itself through the Love Jones EP I did with Krush Love and then Pigeons & Waffles with Montana Macks.

2015 kicks off with me wanting to put some music out, but I didn’t know how I was going to do it. I reached out to work with Ryan Lofty to see if he could help me with songwriting- we had been talking about working for years prior to this. Ryan was interested, so I went out to Vegas for 2 days spent 8 days in LA, and on the last day of the trip came back to Vegas. In two days time, we had two records done quickly. I remember telling Ryan specifically that I wanted to make pop music. Over two years, I made probably four trips. He’s crazy busy because he does a lot of commercial work and composing. I’m just grateful that I’m able to fit some time in his schedule. Last summer I went out there for the last run of sessions, ended up with 10 songs to choose from. That was nice to get some closure and see it coming along. Preparing to enter into this new pop music phase even though everyone knew me as a hip-hop artist, I was taking a big risk, but I think it’s proven to be a move that’s helped me make a statement in terms of my songwriting chops.

How did it feel to beChicagoo Reader’s runner up hip-hop artist of 2016 behind chance?

That was crazy. I remember waking up in Vegas on one of my last days before I head back to Chicago and I found out I was listed as the runner-up behind Chance The Rapper in the best rapper of Chicago award. Here I am making pop songs and the music I have been making my whole life is finally being acknowledged. It’s bizarre. When I’m least expecting it, all of a sudden people want to recognize me. It felt very fulfilling. Honestly, if anything it affirmed my approach to the music the last two years. Where I’m taking it to people that want to be genuinely entertained, not necessarily focusing on one clique or one scene.

Initially All Smiles was SCC & Friends because SCC was the reason we initially got this going. We wanted to book shows for other people. It was a party, a fun time and we got to have friends we met along the way perform. As time went on, my aspiration was to trade shows with people who had access to other venues in Chicago. Now, I scout talent and look to bring in new people and integrate them with older acts and artists, known and unknown. I want to keep doing this forever. The amount of time I’ve put into this, it would be foolish to cut the cord. Every now and then I thought this would be it, but I’ve learned to adjust.

I have been able to put on a ton of shows and have been able to book a ton of artists and I’m super thankful. I believe I booked one of the first Hurt Everybody shows, Tomorrow Kingz, Red Pill, Verbal Kent, Apollo Brown, Robust, Pugs Adams, Elton Aura, Tasha, Ric Wilson, theWHOevers, Retrospect, Chandler London, Qari, Melo and so many others.

My five-year anniversary show is today and on it will be LA Vangogh, Me’Chelle, Sketch185, Robust, Second City Citizens, and Dj Elliven. 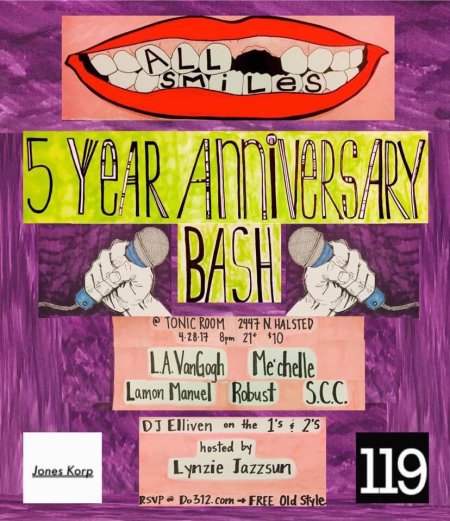 For people who haven’t listened to you. What are three songs you want people to listen to of yours? Also, who are three artists you want to work with?

First and foremost I would say listen to Smooth. Soundcheck. And lastly, Everything off of vegas. That’s one of my favorite songs.

David Ashley – He is one of my favorite rappers from Chicago. His bars are crazy and I have such respect for his pen game. Last summer he dropped  a project called ‘Strictly for the heads’ and it really impressed me and made me hungry.

Peter Cottontale – I would love to work with him. I’ve known him for such a long time and it’s been amazing watching his journey. Talk about excitement on my end. Seeing a friend of mine go from where he’s been to where he is at now is awesome.

Tasha – I think we could make some beautiful stuff together.

I’d like to be remembered for my honesty, whether right and wrong (I’ve never sought to be malicious when it came to voicing my opinions), being able to help bring the community together and court people’s sense of curiosity, and as an ambassador for this city. I truly love Chicago and I will forever try to showcase it in a positive way.