I’m Lluvia Rosa Vela and I was born in Austin, Texas.

My parents were both in a reggae band when I was growing up so we were pretty much on tour for the most part. I was homeschooled and my mom would teach us when we were on the road. When we were back from tour and in Austin we were a part of this group called Austin Area Homeschoolers. They provided a bunch of different social activities for kids who didn’t have to go to school. We played soccer together, theater and went on field trips and stuff like that. It was pretty sweet. I played hella sports and got to hang out with musicians all day.

When do you begin to witness that you have creative talents?

I was always messing around with instruments when I was younger. I didn’t really realize it until my mom mentioned it to me. We used to grab the mic and record songs. My mom would make us sing songs that she would write during the holidays that she created because we don’t celebrate American holidays. I didn’t actually start making music until I was about 14. By that time we had moved to California. Back then all I did was sports and acting. I got really into theatre tech, activities like engineering, lighting, and building sets for stages at  Zachary Scott Theatre in Texas.

What caused the move to California right away?

My parents went on tour in 2001. They went to Reggae On The River and met this lady and she was like, “Yo you gotta move to California. I’m going to give you this house.” After that my dad came back to Texas, opened the door, and was like, “We’re moving to California!” Within a few weeks we were in a van headed to California. We lived on an Indian reservation 3 hours north of San Francisco. My parents were still touring and I continued getting homeschooled until I was 14. Then I would go to “home study” which consisted of going to school once a week. The teacher fucked with me so my schooling was literally going to a stable and working with horses all day. From there I started going to an alternative charter school called “La Vida” and it was pretty much the same thing. I’d go to school once a week and the only classes they offered were poetry, art, math, and history. I mean, they had a science class but nobody really took that class. We just said we took it. [Laughs] I did that for a while before I started getting into trouble. I was robbing and breaking into cars when I was 14. I almost got sent to juvie and that’s how I got into music. It was either get sent to juvie or be grounded for 6 months.  My dad went to the sheriff and told them, “You’re not taking my daughter,” and they were like, “Well, nobody has ever done this before so go ahead. You can have her.”

When you first start getting into music, what kind of sound are you making?

My dad was and is a producer and he made a lot of hip-hop music. Besides doing the reggae thing with my mom’s band, he would go to this event called Hip–Hop Hump Day back in Texas. I wasn’t allowed to listen to Hip Hop so I didn’t know about A Tribe Called Quest or Dr. Dre or anything like that. I just knew what my dad did. He would play the drums or the bass and someone would get up and freestyle. After seeing that at a young age, I was drawn to that, but I never realized how big [hip hop music] was until I started making beats. When I started making beats it was straight up “boom bap”, just samples and drums. I thought I was horrible until people told me that this is how people naturally started making beats. From there, I just kept making beats, and after six months I put out my first mixtape.

I moved to Chicago in 2010. My music just got better and bigger. Everything that I wanted to do musically wise, I was able to. There were so many doors that opened up to me. I didn’t expect any of this to happen. I came here to cook for THEMpeople.

Side note: Before I came here, I was living on the Indian reservation and at 16 my dad was asking what I was going to do since I wasn’t in school. At the time, I was catering people’s parties so I went to Berkley for culinary school. There, I met Young Stunna from the wolfpack and we would hang out every day. He introduced me to pretty much anybody in the Bay that was popping in 2006. They’re the ones who told me my shit was hot and I should keep going. I kept making music, but not really allowing people to hear it. I then moved to Hollywood to attend another culinary school and linked up with Colin Tilley. He wanted to hear my music so I let him. After that, he got me studio equipment and basically said, “Make what you want to make.” I started putting my music on MySpace and people really liked it so I flew out to Chicago in 2009 for a visit then moved a year later.

Did you first start making music with THEMpeople when you moved here to Chicago?

Yes, literally the night that I landed, I went to their studio. For the first 3-5 years on and off I would stay at their studio. Working with them has been amazing. I’ve been able to learn so much from them. They put me under their wing and now looking back I don’t think I could ever imagine my life without them.

How does Drama come about?

I was working with THEMpeople and they introduced me to the Savemoney guys. I had set up a beat making session with Caleb James of Savemoney and Jean Deaux walked in. Caleb introduced us like “yall damn near sisters” After we played each other our music that night, we instantly became best friends. Up until that point, I don’t think I’ve ever become best friends with someone like that. We just clicked. Jean Deaux was working with Na’el at the time and was telling him he should work with me. A year later, he sent me a beat and told me to come through to the studio and I did. We recorded a song and he said it was hot, he was like do another one, it was hot, and we just kept making more and more music. A week later he calls me and is like, “I’m starting a band, you want to be in it?” I was like sure, and he goes, “We are having a meeting this week”. I go to the meeting and he says, “Actually, the band is just us, we are a duo.” Drama began and started growing and growing. I didn’t realize how fast it was going to be. Instantly, we were getting movie placements, people calling us to do shows and people trying to sign us but we didn’t want that. It’s now been two years and we’re still going at our own pace.

Do you see how you approach a song differently based on the artist?

I try not to let the production affect how I write. When I first started writing with Na’el that’s what made it really easy. He didn’t care how I wrote my songs. You’ll notice that with the stuff I put up on SoundCloud, whether it is my personal stuff or music with THEMpeople, it’s all a lot of stream of conscious stuff. There may not be a hook and I might say the title of the song once, or I might just sing the hook once and you have to replay the song again if you want to hear it. With Na’el he will let me do that and pick it apart and make a chorus or a bridge. Sometimes it drives me crazy, but it sounds hot and I love it. I try not to change my sound though based off working with certain artist’s because that would drive me insane. It’s really hard for me to get called into the studio and work with somebody because technically I’m not a songwriter. I’m a storyteller. When I go into the studio, I listen to the beat and think of what happened today and how I can explain it. Whether that be three words or ten, I just always give my story. 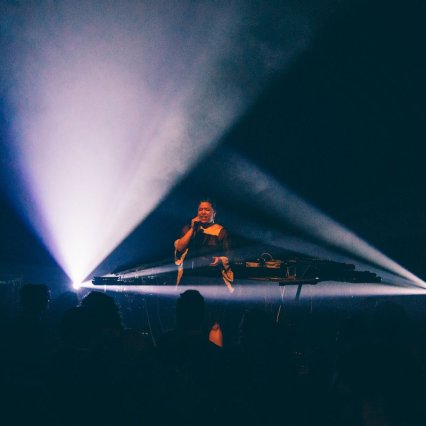 You said that Kurt Cobain is one of your favorite artists. Why is that?

I don’t feel like he was ever trying to sing at all. The music came on and he would just open his mouth. Whatever note was hit, was hit, and it just so happened that they were all great. He didn’t give a fuck and I got really inspired by that form of freedom.

You once tweeted “I can’t really sing. My music is a combination of emotion, production, emotion, and passion. You like the music and you like what I’m saying but I can’t sing.” This was two years ago. Do you still think that you can’t sing?

I think I can sing but I don’t think I’m where I want to be. I feel like there are still a lot of noises inside of me that I’m afraid to release.

How do your inspirations from Brazilian and Hindu music come about?

As a kid, I was obsessed with this movie called, The Three Caballeros. In the 90s, all my dad’s Brazilian friends would stay with us during SXSW ( i hated SXSW back then) and play their Brazilian music. It drove me crazy but as I grew up, I realized that my voice sounded the best over boom bap drums and Brazilian guitars.

As far as Hindu music and culture, my mom has told me a story about when she had pneumonia and Babaji and Mataji came to her and taught her how to breathe. She said I’d walk around and talk about how Babaji came to me she’s always been into yoga and we love watching bollywood films, so naturally…and also indian food is FIRE

What can we expect for you to end out the year with?

Honestly, I don’t even know. My life is so random right now. I’m just coming up with ideas and then them just happening tomorrow. Hopefully, another EP from Drama and an album with thempeople and some type of mini series of “Cooking With Via”. I also want to end off the year starting 2018 with a tour. Drama has been working with some artists overseas, so hopefully going to Europe is something that could happen for us.

Who are three artists you’d like to work with?

I would love to work with Sinkane, Jennah Bell, and 9th wonder.

What are three songs you’d suggest people listen to?