What’s going on man go ahead and introduce yourself

Yo, I’m Logan Cage, a rapper born and raised in the Southside of Chicago.

Life growing up was rough financially and emotionally. The neighborhood I grew up in was rough. On top of that, at 10 years old my dad was arrested, thrown in jail, and is still there to this day. Growing up without my dad made me grow up way quicker than my peers.

When did you start getting into music?

I’ve always appreciated music, even when I was a little kid. When my Dad was around, he was always playing a ton of Tupac, Biggie, Bone Thugz, and Do or Die in the house. It wasn’t until I was around 17-18 that I realized I had a passion for making music. I felt like music was my escape, it was my way of expressing myself. Real life was smacking me in the face at the time, I had dropped out of school and one of my best friends was killed. Looking back, I felt like music found me.

As you first started making music, how many people didn’t take you serious?

A ton of people didn’t take me seriously, including my friends and family. I remember many people telling me that I needed a backup plan. As time went on, those doubters eventually turned into supporters. My elders just didn’t get it, and I feel like that’s the case for many artists/creative.

1636 from start to finish took about a year to make. During the journey of 1636 I remember being so gone from the drugs, a lot of it has turned to a blur. The project was filled with nothing but raw emotion and talent for my debut project. The intentions of this project were to speak to my fans for the first time. I had created patterns and flows that were raw and not cohesive and I think that’s what made the project so beautiful, it was authentic.

This past year has been your best year as an artist, with the release of two projects The New Wave and Still Iconic. Talk to us a bit about each project

2016 was a good year for me because it was a big learning year. I didn’t have any expectations I just wanted to rebuild. At the end of 2015, I parted ways with my management, and it left me feeling like I took a huge step backwards. Going into 2016 I remember saying that I didn’t want to drop a tape anytime soon, I just wanted to make as much music as possible. The New Wave we ended up creating in a month and a half. The New Wave helped me find my groove again and I just wanted to release music. Still Iconic was basically the same time, it took a little longer, but I just wanted to put out some music. I will say this though, right now I have been making some of the best music for my next big project “Today and Tomorrow”.

Two years ago you dropped my favorite song of yours “Lost”, do you think you found your purpose since?

I loved that little time I was dropping music. Lost, Patrol, and Look Up To were some great songs that I still listen to today. When it comes to finding my purpose, I think I’m still lost. I don’t feel like you’ll ever find your way. As much as I feel blurred and clogged up, I see things becoming clearer.

Talk to us about your relationship with your producer Flight

Flight is my guy! We met through my old manager, who was Flights friend and actually managed Flight. They found my music off of Youtube. We ended up meeting in the later part of 2013 and started making music right away. The first song we made was terrible and after the song he wanted to stop working with me. I told Flight, give this some time. Don’t give up so fast. After that, I started taking music a lot more seriously and we began to make great songs together. We made Famous, Intro 36, and The Mob right away. After putting out those songs we started creating a real chemistry and realized lets continue doing this together. It isn’t always happy and hoorahs between us, we have fights, heated arguments, but at the end of the day we know the longevity of what we have created. Little shit will never get the best of us.

Recently you changed your name from Logan to Logan Cage. Talk to us about the new name

I wanted to add some depth to my name. When you look up Logan a million things pop up. While I was thinking of names, I was thinking of my Dad being locked up and was doing research on the Chicago Grid System. Chicago is the only city that has a box/square grid system amongst a very segregated city. It looks like they have us in cages. Right after that, I was on Netflix and Gone In Sixty Seconds popped up and I saw Nicholas Cage. Boom, it clicked, Logan Cage.

Do you feel like you’re underappreciated here in Chicago?

I think you can say that, yeah. I’ve also learned that Chicago is just that type of city. Another thing is I don’t have a major cosign, I’m only Chicago as of now. I haven’t quite branched out yet, it’s a blessing and a curse. People do fuck with my music, and me but from a distance. They’d rather try to eliminate the competition.

After getting shot, how did you change outlook on life?

The area in which I grew up, that life was constantly exposed to me. People have been dying all around me since I was a little kid. This time was different though; this was the time where I was on the verge of dying myself. Getting shot in the head made me look at things a bit differently. I wont say I have some newfound appreciation for life, I still move the same way, but now it’s an experience I witnessed first hand and could tell the kids about.

How important is the live show to you? 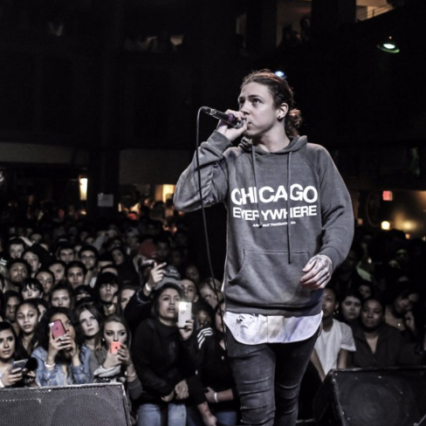 With 2017 just beginning, who are some artists you would like to work with this year?

When it comes to Chicago, I would love to work with Chance. I’m a huge fan of his and what he constantly does for the city. These last two may sound like a reach, but J. Cole and Eminem.

I want to be remembered as an icon, a legend. I want everyone to remember that I sparked something special for the people and continued to provide for my family.