What’s going on, go ahead and introduce yourself

What up it’s Stuk One, The Coolest Ever, Air crew. I’m a rap spray nerd living in Chicago by way of Rockford, IL. 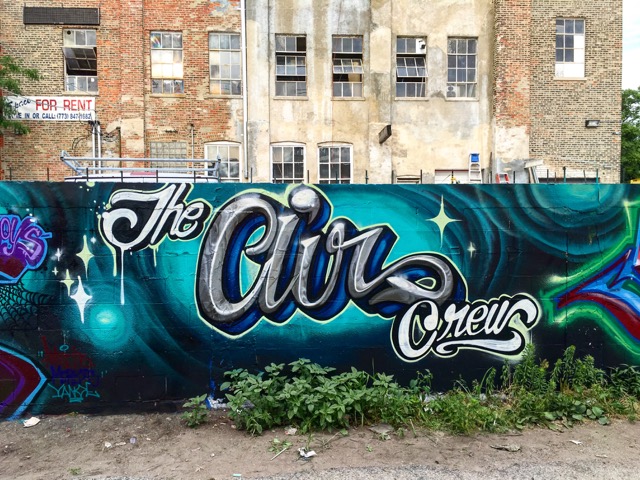 Lets start from the beginning, how was your life like growing up?

Life was cool growing up. I grew up in the south side of Rockford, IL. Raised by a considerably straight laced blue collar family.  As a kid I was into playing baseball, basketball and ran around doing hood rat things with my friends. Around my freshman year in H.S. my interest in skating eventually out grew any desire to play sports, Wu-tang became cooler than Bad Religion and sneakers became the new baseball card. To sum it up we always made the best of any situation.

When did you start to find your artistic skills?

I don’t know if I could pinpoint a specific time finding skills. I’d say i’ve learned artistic skills everyday for as long as I can remember. Some of the earliest stuff still lurking around my parent’s house are old Looney toons characters, ninja turtles drawings and some random school art projects.

How did you first get introduced to graffiti?

I remember sitting in class during 6th grade and my homie Thomas had the cassette/single of “All I need” by Method Man and Mary J. Blige. The art on the cover immediately caught my eye, the way method man’s name was written…the arrow. That’s the first hand style I had ever seen. It wasn’t until a couple years later in middle school when I met a kid who’s older brother hung out with a guy who “tagged”. I convinced my friend to get some drawings and sure enough he came through. His brother’s friend wrote Daze TS TFD (Trend Setters and The Funk Division) from then on I was hooked.

What was it that made you want to be a graffiti artist/get involved with graffiti?

After I became aware it was even a thing seeing it around town, seeing people up in skate magazines. There wasn’t much of a scene in my hometown so I had to pretty much figure out all the fundamentals on my own. The challenge of it was all that it took for me to get involved.

Who were some of your inspirations coming up as a young artist?

Around 1999 I discovered the few actual writers my city had throw a jam called Grills and Skills. I was always a quiet kid so I never went to the actual jam until after high school but I would always ride my bike up there the week after and go check everything out. One of the creators of the event was Werk One TS, TFD. He was in my opinion the dopest piecer in Illinois and he was from Rockford so it was only natural most of my early influence came from him. I haven’t seen or spoke to him in some years but really hope to spray with the homie again. Some of my other major influences were Daze TS TFD another founder of Grills and Skills, Korl IM CMW one of the wildest humans i’ve ever met. Dymz TFD NGA who currently writes PAI TBC KYM. Elotes NSH, all the XQZ RK guys and can’t forget Revise CMW.

Early on in your career, did the term ‘struggling artist’ ever scare you?

Nah, not to me. Struggling is required because in order to stand up you gotta know what it’s like to fall down.

What’s the significant meaning behind STUK?

To keep it a 100, there’s no real meaning. I came up with that name sitting in my homies living room. I was 18 fresh off my first run in with the law and had to change up to keep it moving. I wrote out the alphabet and was just putting letters together to form a good combination I felt I could pull off. Originally I had decided on the name Tusk and while I was explaining to my buddy Matt G. (shout out to Matt) how I could make each letter work with each other he interrupts with “why don’t you switch it to Stuk?!” from then on that’s what  it’s been. Later on I came up with a nerdy ass acronym: Steadily Throwin Up Killers On Nightly Excursions. Haha 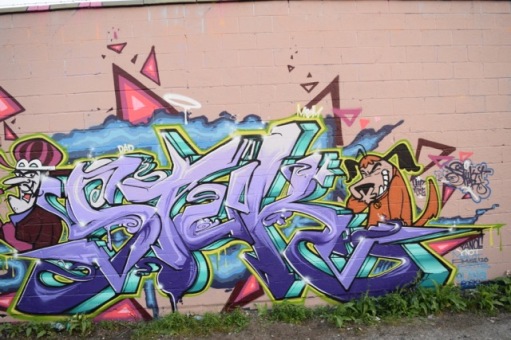 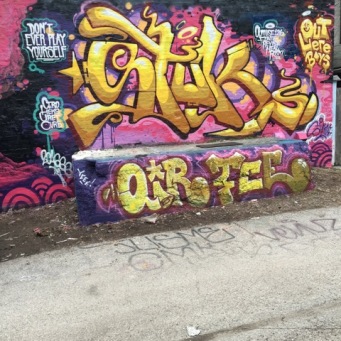 When did you get down with the infamous AIR Crew?

About 3ish years ago, I met them at meeting of Styles in Chicago. They gave me a little ass spot and I remember being bummed because I had no room for a piece. I painted one of the mobster weasels from Roger Rabbit and BMO from Adventure. I got done pretty quick, had some beers and put some smoke in the air with Des. A couple months later we painted Fargo skate park in Dekalb, IL with a group of other writers. We both climbed up on some sketchy shit to paint some toss ups and from then on clicked up. I then officially turned AIR a few months before I moved out to Chicago.

Scrolling through your IG feed, we see you hanging with Amuse a lot. How did you guys develop a strong relationship?

Amuse is a G. I met him at Grills and Skills in 2006, he was super cool and respectful then and somehow despite all the shit the world throws at us these days he still continues to maintain the positive attitude and respect for his fellow man. We both like to burn trees, crack jokes and empty spray cans. That’s about it. #OutHereBoys

Who are some others you have developed great relationships with throughout the years in the scene?

Revise CMW, everyone knows he’s a fucking machine but he really put me on when I first moved here. I came to Chicago to paint and that’s it. Revise opened all the major doors for me to begin making money and worked side by side with me on tons of jobs. Keep killing it brotha. All the guys in AIR crew of course. Flash ABC keeps letting me paint his walls haha. Fonte! Fonte is the man, if ya don’t know now ya know. Phor, Obe and Bapes have always been super cool to me. Elotes, FQ, Merlot and the list goes on. Basically I try to keep it cool with everyone to be honest. Obviously it doesn’t always work that way but life goes on. 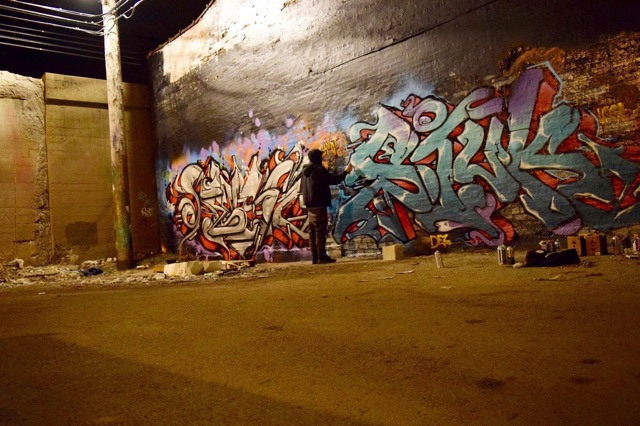 I see you have a strong relationship with Chicago Truborn, could there be a possible Stuk gallery show in the future?

Yessirt, my first solo show will be October 22nd. The show will be consisting of a whole new body of work and we are going to release the first of four artists series hats with GrassRoots Chicago and Chicago Truborn. It’s going to be a good one, tell your friends to bring their friends.

As a kid did you ever think you would be painting for a living?

Ha, not at all. I wanted to be Michael Jordan.

After all of these years, what motivates you to continue to paint?

Not even ashamed to quote drake here, “the moment I stop having fun with it, I’ll be done with it.” It’s a constantly evolving art form, I doubt i’ll ever stop. 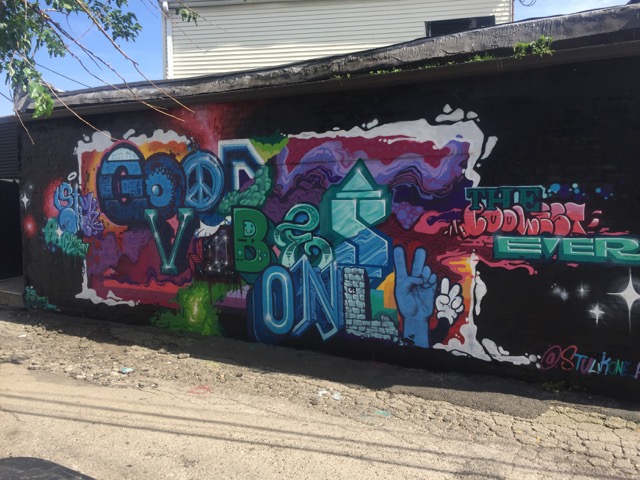 This year, we have been seeing you kill every piece you have put out. Recently you were able to paint the Mega Mall and your piece easily was the one that stood out most to the people. Where did you get the inspiration to create this piece?

Appreciate the kind words boss!  “Take Chances Everyday”. It’s actually a crew spell out for my other squad TCE. The phrase though is something I agree with and believe in. If you live your life in fear and never take a chance how will you ever know if you’d be successful at it? 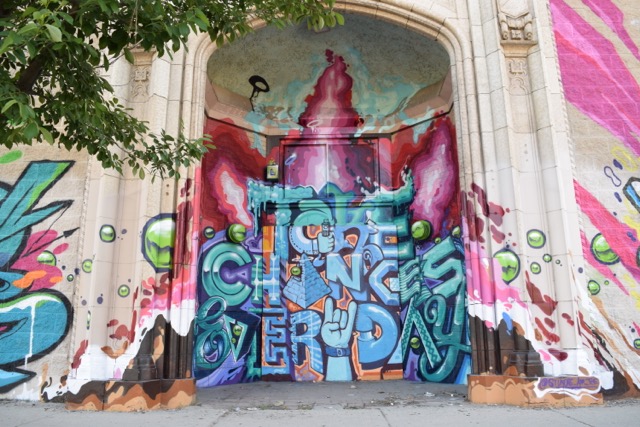 Antck said what he liked most about your work was the fact that you never look to take any easy ways out with your work, you’re consistently taking each piece to the next level. Has that always been a mindset that you’ve had with your artwork?

That was crazy reading that. Long time fan of Antck, dude is a certified OG in my eyes. Thanks Antck! I guess you could say its been a mindset i’ve had. I just know I can always learn more and get better so I push myself to the best of my capabilities each time I spray.

How has social media helped play a pivotal role in getting commission pieces?

I hate social media but I play the game. The availability of contact is really what it is. Nobody will be able to hire you if they can’t find you.

How important is social media to an artist in this generation?

Tough to say, you’re more than likely missing out on certain opportunities without it so go sign up and follow me @Stukone_AIR_TCE haha

If you could travel to any place in the world to paint where would it be?

I dunno, maybe Australia or Amsterdam? Amsterdam definitely Amsterdam I heard they got the best coffee shops.

How do you want to be remembered when it’s all said and done?