What’s going on everyone, I’m Keath Sodapop AKA Phor. I was born and raised on the southside of Chicago, Bridgeport exactly. I’m a graffiti artist, but more importantly, a father, and husband. Shoutouts to my wife Ali 28 (Cream Sodapop), she has played a huge part in my progression in life.

How was life like growing up on the south side of Chicago in the 90’s?

Growing up in the Southside was rough. The Southside just has a grimy presence. I was always pressured into getting involved with gangs, but that wasn’t what I wanted to do with my life.

Did graffiti help you stay away from gangbanging and the streets?

Graffiti was the main reason I stayed away from the streets. Graffiti artists get a bad wrap for vandalizing, but what people don’t understand is, when you grow up in gang-infested neighborhoods, there’s not much you can do. Luckily, I was able to find and get involved with graffiti. I chose graffiti because it had the more productive and positive path for me.

Go ahead explain the reason behind the name Phor

One of my biggest influences was my homie named Phibs. I always wanted to have a name like Phibs. I ended up picking Phor because it was like Phibs. The Ph was silent. I liked how the letters had flowed together. Also, my birthday is on March 4th, which is Chicago’s birthday as well. I represent Chicago to the fullest.

When did you first get involved with graffiti?

Graffiti was the first medium I got involved with. As a kid, I had always been tagging my name up in alleyways. Also, right by my house was an abandoned building, where all the graff writers would get up. Around 1990-1992 is when I first really started getting into graffiti. Before Phor, I had a couple names I was writing. My first name was Fido Dido. The name Fido Dido came from the 7up soda campaign. Next, I wrote Gram, and then I decided to go with Phor. It wasn’t until around 1996 when I decided to do my first major piece. The first piece was on a broken down pick up truck that was on the side of the road. The piece was Yellow and Emerald Green and ended up staying up for months before someone else went over it.

When you first got into graff did you have any mentors who helped you learn the game?

I’d have to say Phibs was my mentor. We grew up before graffiti; he was one of my best friends, and still is. He had been involved with graffiti for a while before I got into it. He gave me my first Prisma markers, he gave me stickers and caps that I could use, and also share with my friends. At his house, he had all the graffiti magazines in which he would show me new styles and new pieces. I was also influenced by dudes like Antck, Pengo, Sb crew, Peas, Actor, AIR Crew, CAB Crew, Shred (DC5), Ill Skills, AWOL, and ChiRocks. Growing up we would always go to Underground Wheels, a skate shop in Ford City Mall. This spot had all the new graffiti magazines; this place was like what the Internet is to this generation of artists. 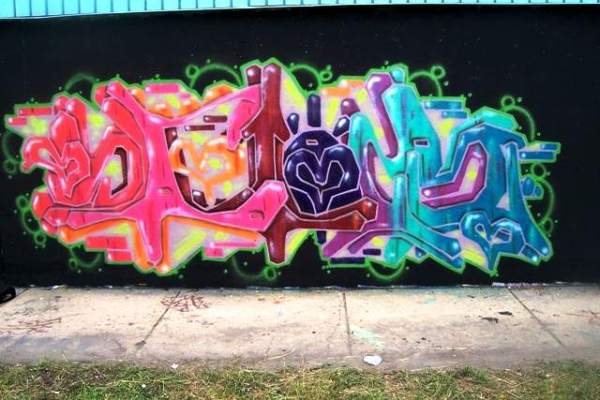 When did you get into CMK?

I was first introduced to CMK around 1997. I was under a crew called BP, which was led by BeeRok. Phibs, who had already turned CMK, told me I should get down with BeeRok. I ended up being BP for almost 2 years. I officially became CMK in the winter of 1998. The head ANGER put me in. From 1998-2000, I was still considered a prospect. Later on in 2000, I really began to start getting up like crazy. I had started finding my style and creating real pieces.

What was it about CMK that made you want to join rather than any other crew?

Growing up I, unfortunately, didn’t have the best upbringing/family. CMK ended up being that family that I never had. Graffiti filled the void from my mother, and CMK was the father. CMK did a good job of holding the neighborhood down and developing a strong brotherhood bond. Growing up in the southside, CMK had a mysterious vibe. That intrigued me; it was something I felt I wanted to be apart of. DISEM, ANGER, OPIK, and GOYA were dudes I had looked up to as well. They did a great job of pushing CMK forward.

Throughout the years how has CMK become a very well known crew?

CMK has become known due to a couple reasons I’d have to say. Expansion was something that helped. We always wanted to look more than just Chicago. We also put in a lot of work. We really were dedicated to this crew. We didn’t ever want to have a closed minded mentality. We knew that in order to keep moving forward we would have to develop new connections. The newer generations of artists are whom we looked to build with. We knew that so many negative things in life could heavily influence the younger cats, and we wanted to steer them away from that. Our main focus was to turn each member into a well-developed human. We have developed chapters in other countries now.

Back in the 90’s were you into trading flicks with artists?

In the 90’s I definitely did a couple mail runs. One that was really big for me was with this cat named VOX CBS Crew from Los Angeles. I was a huge fan of his work. One day we ended up meeting at Paint Louis in 2001 and decided to trade flicks. Trading with Vox really inspired me to trade flicks with artists from all over the world. I was also trading with local artists. This dude Jores who is the brother of a crewmate of mine (Bapes) is someone I would always trade with.

Do you think social media has helped or hurt graffiti and graffiti culture?

With anything in life there’s positives and negatives. The positives are that it helps getting exposure. Also, you’re able to market and do a lot for yourself with a low budget. Look to utilize social media in the right ways. For me, social media is all about sharing and connecting with other artists.

What has continued to motivate you to paint the older you have got?

I’ve never been a quitter. Graffiti is my life. Also, going out to paint keeps me feeling young. My wife, my daughter, and my crew also motivate me to continue going.

How do you feel about the newer generations of kids? Do you feel they pay enough homage/respect to the generations that have come before?

You’ve been able to travel a lot and paint. What has been your favorite spot to paint at?

I’ve been lucky enough to travel parts of the world and paint with some of my best friends. I’ve been able to travel to Italy, Canada, Texas, Colorado, Arizona, and all throughout the Midwest to paint. Like I was saying earlier, I always had the mindset to take it beyond Chicago. I want to be known as a nationwide graffiti artist; I don’t want to be boxed in as a southside graffiti writer. I’d have to say Arizona was one of my favorite spots to paint. I was able to do four pieces there. Houston and El paso were also good trips.

What advice can you give any young artists?

If you’re a young artist, make sure you stay dedicated and be authentic. Really make sure you practice. It all sounds cliché, but it’s the truth. I also think you should take advantage of school. There are so many resources in school. Really apply positive thinking to your life as well.

Anything next we should look out for in 2016

I will just continue working on my craft. I’ll be working on marketing and promotion for Chicago Airbrush Supply. I also will be working with CampUs. I will continue linking up with C2X and MLAW to create more videos. I’m also looking to get more in depth with my paintings. I am hyped upon finishing the year with a lot of opportunities. Hopefully I’ll be traveling as well, looking either to get a European or Japan trip together.